Topping an Editor's Decision List: Choice of Platform Is the Main Ingredient 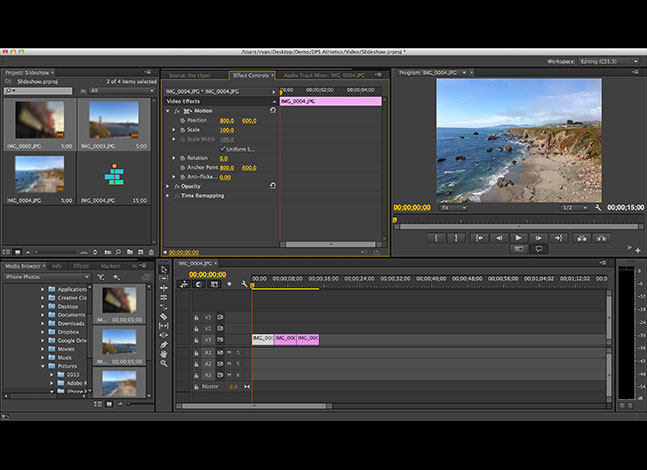 To understand the technical genius of film editors, tune in to The Food Channel and take a look at the competition reality show Chopped. It seems entirely unrelated, but really, the parallels of this program to the methodologies of film editors are similar, if not uncanny. It’s a helpful analogy in explaining the technical mastery of these artists.

First, Chopped takes several chefs, hands them a basket of very distinct and limited ingredients, and instructs them to prepare a meal using those items only. Some chefs are ill-prepared and caught off-guard. In a Darwinian sense, they’re eliminated first, while the stronger competitors remain. The more talented chefs rise to the occasion, despite strict conditions, and whip up the best dishes both in taste and presentation. And because we as diners often forget or take for granted the technical mastery of those preparing our meals, we tend to judge their culinary skills on the basis of their finished product. But with Chopped, that application of value is changed entirely. The audience gets to witness every last detail of the chefs’ processes, from the kitchen tools they use to the specific methods of dough-kneading.

That brings us back to film editors. Sure, as audience members, we see a final cut of a movie and immediately notice the aesthetic aspects first—the story, its characters and the film’s overall tone. Rarely do we acknowledge the technical approaches used in the editing process because, really, the lay audience isn’t as familiar with that part of production. Like restaurant patrons, audiences tend to judge talent on the finished product because they haven’t seen what goes on behind the curtain.

In reality, the technical skills and applications of a film editor are vital to the creation of an impactful documentary. What good is the editor’s creative sense if his or her repertoire lacks expertise in the wide range of technical platforms? That editor may have an amazing creative concept prime for development, but that idea will remain just that—an idea—if he or she fails to execute on the technical side.

Among the many platforms out there, the most popular ones for documentary film editing appear to be Apple Final Cut Pro 7, Avid Media Composer and Adobe Premiere. Certainly, editors lean toward preferred platforms. Some like the way media transfers on one system; others like the familiarity factor with another. Speaking to the issue of familiarity, editor Matt Hamachek (Cartel Land, Meet the Patels, Gideon’s Army) notes, “Finding the platform that’s easiest for you, and also easiest for the director with whom you’ll be working, is just choice.” Yes, the choices are varied, but each editor has a specific bias for each system.

Final Cut Pro 7 is a fan favorite of editors Hamachek and Mary Manhardt. “I’ve been working in Final Cut for the last seven or eight years, or for as long as it’s been around,” says Manhardt, whose credits include Tig, The Babushkas of Chernobyl and American Promise. “I started learning on Avid, but when Final Cut arrived, it was cheaper. Everybody in docs was using Final Cut, so I switched platforms to the point where it’s now my first choice.” Similarly, Hamachek notes his preferred use of Final Cut 7 is founded mainly on his overall savvy of the system. “I’ve edited in a lot of different platforms, and I find Final Cut 7 to be the easiest for me; it’s the one with which I’m most familiar,” he says. “For me, it’s really Final Cut 7 or nothing else.”

However, editors aren’t always lucky to be able to choose the platform in which they work. Because of the varied systems and their respective technical advantages, editors are often cutting footage on a preferred platform of the director or the assistant editor. Hence, having the know-how to handle each of the different systems is incredibly important. Manhardt says, “There’s very seldom a project that I’m working on from scratch, so when people tell me, ‘We’re on Final Cut,’ I’m not going to tell them, ‘We have to cut in Avid or I’m not working with you.’ They’ll just say, ‘Okay, you’re not working on it.’” Limiting oneself to one or two editing platforms is a sure-fire way to lose jobs and credibility within the industry network.

And looking back to the Chopped analogy, you can see why some of the chefs are eliminated almost immediately. They’re unable to work within their given means. Their technical knowledge is not adaptable, and they can’t successfully execute. The editor and the chef are two in the same.

Speaking of the aforementioned Avid, it’s another favorite among documentary film editors. Pedro Kos (The Crash Reel, The Square, The Island President) made the switch to Avid after working in Final Cut Pro 7 for years. “Final Cut was not a perfect software in the slightest,” he says. “When you’re working with very different types of media and different frame rates on a long timeline, it puts a lot of stress on the system and it tends to crash.” It was a nuisance for Kos, so much that it became a running joke with him and his colleagues. “While editing The Crash Reel, we joked that the title was apropos, because I used to crash almost five times a day using Final Cut.”

After dealing with the buggy platform for so long, Kos made the switch to Avid. “I find a lot of the industry in Los Angeles is Avid-based,” he says, “so the switch made sense.” He explains the system is much more conducive to editing narratives or larger documentaries, as the system has better media management and turnover functions. “Turning over reels to sound and picture departments is a lot simpler and smoother on Avid,” says Kos. “The settings you export are faster, and its interfaces match better with post software. Color graders, sound mixers and supervisors are mostly using platforms that comply easily with Avid.”

Like Kos, Lewis Erskine (Cesar’s Last Fast, Free Angela and All Political Prisoners, Freedom Riders) developed his fondness for Avid after discovering its ability to handle long-form media much more effectively than the other platforms. “Avid’s biggest benefit is that it can handle large amounts of material robustly,” he says. “And that benefit is one of maturity. Avid’s been around a long time, and over that time, it’s been able to work out the bugs.” Now a stable platform, it’s developed a cult following among doc editors who laud Avid for its efficiency.

Erskine specifically notes the advantages of the Avid platform: “Most of the films I’m known for are long-form historical documentaries. And most of those films have a huge amount of material—thousands of photographs, hundreds of hours of archived footage, 20 interviews, and sometimes a person re-interviews a number of times. On projects like that, Avid is just the obvious choice.” He continues, “It is flawless because it can hold, organize and play all that material.”

Rounding out the top editing platforms is Adobe’s Premiere, a system designed for those editors in need of extra bells and whistles. Hamachek and Manhardt, though admirers of the Final Cut Pro 7 platform, acknowledge these Premiere advantages. Hamachek says, “I think in Premiere, people really love that you can seamlessly integrate Adobe After Effects into your sequence without having to render it out and export it.” Manhardt adds, “For content reasons, there are a lot of benefits in using Premiere. If you know you’re going to be working on something that’s going to need a lot of effects or treatment, Premiere would be the best platform to use.” In regards to data storage, Manhardt also argues there’s really no significant difference among Premiere, Avid and Final Cut. While it’s not as holistically beneficial as the other platforms, Premiere seems to operate similarly. Not one system is far superior to the others; it all boils down to an editor’s preferred choice.

However, one platform that’s received a tremendous amount of harsh criticism is Final Cut Pro 10, which Manhardt claims lacks professional polish. “I would never touch 10, and I don’t think any other professional would touch it either.” Hamacheck adds, “I really haven’t heard that many people editing feature-length docs using Final Cut Pro 10. And I don’t know if that’s because it’s genuinely not a good editing system, or because it has a stigma attached to it.”

As many editors know, Final Cut Pro 7 was displaced from the market in 2011 to make room for the revamped and rebranded “FCPX,” a supposed improved platform for the masses. But in making the platform more of a consumer tool than a professional one, Apple removed most of the features necessary for pro editors to work. The result was a complete nightmare for those who had developed a penchant for Final Cut 7.

“To this day, I still don’t understand why Apple got rid of Final Cut 7,” says Hamachek. “It makes absolutely no sense to me. It’s a great piece of software. I just can’t see a reason why they needed to depart from that and build something entirely new.” Editors like Hamachek and Manhardt, who still prefer Final Cut 7, are soaking up as much as they can from the now-defunct platform until it becomes completely stamped out.

In truth, the aversion to Final Cut 10 is less about one’s distaste of the actual platform, since there are very few documentary editors who have actually focused on the software and tried to master it. It’s more about the platform’s reputation that has affected its user numbers. “After the first year it came out, I avoided it like the plague,” says Hamachek. “No one has ever asked me to edit a movie in that platform. I certainly haven’t focused on the software, but based on what I’ve heard, I have no desire to.”

Now, let us revisit Chopped. Take a look at the chefs bumbling with the unfamiliar ingredients and new equipment. Though talented, they struggle with the constraints. And truthfully, it’s hard to imagine any professional not reacting that way under similar conditions.

As an editor, Erskine explains the parallel: “Do your best to learn every system. Maybe you have a preference, but there are good things about every system. And that’s not even the point. The point is to make a great film.” While the chef must make a great dish to move on in the competition, the editor has to make a great film for his or her audience. In order to do that, it becomes a matter of developing technical mastery to allow the creative vision to flow.

Jane Dubzinski is a freelance journalist based in New York City. Besides writing, her interests include travel, art, her bulldog Nelly, and the New England Patriots.

END_OF_DOCUMENT_TOKEN_TO_BE_REPLACED

Is the New Golden Age of Documentary Almost Over?