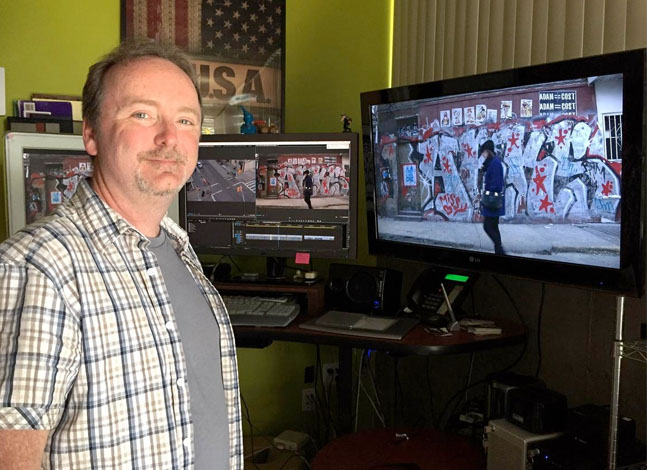 Matt Radecki and Doug Blush will be the lead presenters at IDA's first Tech Day event on the evening of October 27 at the AFI Mark Goodson Screening Room in Los Angeles. For more information: documentary.org/tech-days

The sheer length of time required to make a documentary puts a premium on workflow. Get it right and you’ll wind up with a movie in the end. Get it wrong and you’re in for a world of frustration.

To identify best practices in workflow, Documentary spoke with two masters of the craft: editor Doug Blush, ACE, whose credits include the Oscar-winning Twenty Feet from Stardom, The Hunting Ground and I.O.U.S.A., and online editor Matt Radecki of the post house Different By Design, whose credits include Best of Enemies, Marwencol and The Yes Men Are Revolting.

First of all, how do you define workflow?

Doug Blush: In documentary, workflow is life or death.

What is the first step in proper workflow?

MR: Ideally, you would test your workflow before you do anything. Whatever camera you think you’re going to shoot with primarily, shoot a little bit of footage that’s not critical to your movie. Do whatever transcoding conversions you’re planning to do, run it through whatever system you’re going to edit with, and pass that test of the workflow.

DB: Something you take into account at the beginning of workflow is, “Where am I going to store all this media?” The problem with digital media is that it’s very easy to vaporize. I’ve always lived under that credo/paranoid fear that nothing exists until there’s at least two copies, and sometimes three. Until you back up your media and until you’ve correctly budgeted for that backup to continue forward, you’re not making a film; you’re making a ghost. What you really should do before you budget anything else is get a big, reliable piece of storage that you can put all your stuff on—ideally a RAID storage setup.

MR: A lot of people buy two identical RAIDS, load up their footage on it, and then they know they have it on two systems.

DB: Acquisition, which is going and shooting raw material—usually on little mini-drives that are loaded into the cameras or raw chips that are recorded onto. The second step, almost immediately, is the backup. Before you leave a location you want two copies.

And footage might be in different formats, depending on the cameras used.

MR: On a documentary you tend to shoot with a lot of different cameras. These films are made over years and years. Technology changes; sometimes you start shooting with something and then it becomes something else. Or you hire a new DP or you shoot in a different city and the person you hire uses a different camera. It’s usually four or five different sources.

DB: This is the reason a lot of people take their footage and transcode it into one flavor [codec]—Apple ProRes, usually—because then you’re not playing around with different formats. You’ve got everything unified in one space. So there’s an advantage to having one flavor. The disadvantage is that you’re paying somebody to do a lot of transcoding of stuff into one format. And ProRes is big and it will eat up twice—at least—the amount of hard-drive space you’ve already used to store your original stuff. Alternatively, you can use the native formats and hope for the best, hope there’s no kinks in the edit.

Deciding what editing system to use is an interesting question.

The best advice I give to anybody who’s trying to figure out what edit system to use for their film is, “What are all of your smartest friends using?” Because they’re going to be your tech support. They’re going to be the people you call in the middle of the night when you have a huge problem.

What’s the next step?

DB: Taking all your footage and coming up with an organization plan. How are you going to lay it out so you know how to find things? And this is probably the most kind of “black art” because everybody has a different way he or she likes to organize their stuff. And there’s no right way. There are wrong ways, but there’s no exactly right way.

MR: Ideally you’re going to hire an assistant, an experienced assistant editor, to bring media into the edit system—even if you can’t afford them for more than a couple of days.

DB: You really have to have an assistant and an editor talking to each other. Come up with a formula to make sure that we don’t lose anything, that we have everything organized, usually by shoot and by date and then sometimes broken down by different types of shoots. Some are interviews, others are vérité, shot out in the field. There might be shoots that are kind of hard to categorize. They’re GoPros, drones or things like that. I have a system where I divide those types of footage into different areas of the drives. It just makes it easier to track back to different things.

There are different arguments for whether you should be cutting off of proxies or straight off the original.

DB: We edit original media with the camera.

Another issue impacting workflow is whether your material exists on a central server.

DB: That’s the most elegant way to do it, where you have central storage and everybody feeds off it. That’s assuming you have everybody working in one office and not like with mini-docs, where you’ve got a guy over in Venice and then there’s a woman up in the Valley who’s putting some time in on it and then there’s somebody out in Redlands who happens to have a copy and is working on the graphics. Then you can’t really do this shared storage anymore. You have to do what we affectionately call “sneaker net,” which is simply, whenever you have something new, it has to be physically sent to that other person and they have to be told where to put it on the drive so that it matches everybody else’s stuff. It has to be done just so, or else it gets very confusing.

So now we’re in the actual editing stage of workflow.

MR: This is the happy, blissful, creative, making-a-movie portion of the process where, as long as your dailies are backed up properly and you know that your workflow is sound, you can concentrate on just making a good movie. And then when it comes time to finish, this is when it starts to get complicated again. “Picture lock” is the term for when you no longer are making creative decisions.

Once you picture lock, you start to get into where my company gets involved. We take the films from picture lock through color correction, to delivery.

DB: The coloring stage usually happens simultaneously with the audio mix, or very close to it. So your film splits into two—into the image side, which goes over to color correction, and your audio has headed off to a mixing house.

MR: A lot of people prefer to do their color correction first because then while they’re mixing sound they can be seeing the color. Also, if you’re mixing off the color-corrected image, there’s no reason there should ever be anything out of sync because the sound mixer is mixing off of the final picture.

DB: When all these elements are done, the final step would be the output phase. Output for film festivals is either done to a high-end digital tape format like Sony HD Cam or to a thing called DCP, which stands for Digital Cinema Package. It’s essentially a hard drive with your movie on it, encrypted and encoded at the highest resolution. You can put a security key on it and only a theater with the security key can play the film back.

MR: And then you get into selling your movie and delivering it to a buyer, or delivering it to Netflix or iTunes. In those situations you get their deliverable spec sheet, and hopefully you come to a place like us, a professional post house, to make the deliverable.

How is 4K affecting workflow?

DB: 4K workflow is almost identical to HD. The file sizes are bigger. And the computers you need to lift that weight have to be faster and newer. You have to have a pretty souped-up system and really fast storage to be able to play this stuff back and edit and manipulate it.

MR: We encourage filmmakers to shoot 4K, if they can swing it. If you’re just embarking on a documentary project in 2015, it’s very possible you’re not going to be at the end of your road until 2020. And in 2020, we’re probably going to be in a very 4K world. So it sort of future-proofs you.

What do you wish filmmakers appreciated better about the overall workflow process?

DB: The number one thing is how long it’s going to take. Most people just don’t prepare for enough time. I’ve had many people come to me saying, “I just wanna be done.” And I say, “You can’t think that way. You have to remember all this struggle you put in is for a reason, and just hang in there; once that film’s done, it’s done forever.”

MR: I don’t know if it’s an appreciation thing, but I think more than anything, filmmakers should not be afraid. There’s a real fear of post-production. We have a lot of producers and directors who come through and the first words out of their mouth is, “I’m not technical.” And that’s fine. You don’t need to be technical to be a great storyteller. But you should know to ask about frame rate, frame size and codec. Engage in the process and don’t be afraid of it.

END_OF_DOCUMENT_TOKEN_TO_BE_REPLACED

Tilting At Windmills: The Sometimes Quixotic Pursuit of Transferring Digital Video to Film

Around the World in a Day: The Ultimate YouTube Project