Sound and Vision: 'Samsara' Meditates on the Wheel of Life

Samsara is the third non-verbal film Ron Fricke and I have made, the others being Chronos (1985) and Baraka (1992).  These films have taken us in total to 58 countries, and taken a combined nine years to produce, Samsara being the longest - four and a half years in the making and shot in 25 countries.  We were challenged logistically, technically, artistically and physically in completing this film.

"Samsara" is a Sanskrit word that can be translated broadly as the endless cycle of birth, death and rebirth; another way to express it is, themes related to impermanence.  We used this broad concept to guide our research and locate imagery. The other main criteria for choosing what and where was, the material needed to rise to a level of visual interest that we would consider putting it in the film. Audiences have so much amazing visual imagery available to them on the Internet that it is challenging to find subject matter that is both spectacular and unfamiliar. We primarily used our intuition and gut feeling in making those choices.

All three of the films we have made have been photographed in 70mm, a process that has become more and more difficult as time has gone by due to security issues and the need to move film stock in and out of so many locations without it being X-rayed. We have employed this rarely used format because image is so important to our films. It is a means of bringing a greater emotional impact to the viewing experience, and there is a beauty and immediacy to imagery captured in this venerable wide-screen format that is unique.

When we began Samsara in 2007, we considered a digital approach for image capture.  At that time the digital standard was 2K. The risk with digital is that it is constantly being outmoded by new technology that  significantly ups the ante, and it happens quickly.  When you're going to 25 countries, you need to bring back the footage in a format that is going to stand the test of time. Were we to start Samsara today, it might have been a different decision as digital cinematography has developed significantly in those five years, and the difficulties of working with film in productions like ours have continued to become more challenging.

We have chosen to output Samsara to DCP rather than creating 70mm film prints. There are many reasons for this, but the bottom line is, we believe a digital output yields the best possible viewing experience. It is a combination of using a 50-year-old camera system and cutting-edge digital technology that works for our kind of filmmaking, where we are not shooting actors and numerous takes of scenes, and a camera that is a little noisy usually doesn't matter.

When we produced the Baraka Blu-ray in 2008, we were amazed at the level of detail that we obtained by undertaking an arduous, frame-by-frame, high-resolution scanning process at 8K resolution on Fotokem's renowned Bigfoot scanner. The 8K file for the whole film came in at a massive size, in excess of 20 Terabytes. Dropping the output down to Blu-ray resolution, we were able to retain a level of detail that was beyond our wildest expectations, and the Baraka Blu-ray has been widely regarded as a reference-point disc for home viewing. It was clear that the benefits of capturing high-resolution imagery on 65mm negative were retained and embedded in the digital file.

Using this approach in Samsara, but this time outputting to DCP for theatrical exhibition, was a great way to go for us, and the conversion of theaters to digital, and now 4K projection has been timely. We will also output to Blu-ray after the theatrical release and be ready for other new emerging technologies such as 4K home theater systems.  In addition we have also been able to output stunning 35mm print elements from the 4K DI.

Over the course of these films we have developed a compact, efficient set of tools that are moveable but also give us great flexibility. We carried 30' of dolly track and had a small jib arm that provided about 12' of lift, two cameras, the Panavision Super 70 for standard frame rates and above, and the motion control time-lapse camera designed by Ron for the time-lapse sequences. We also had an auxiliary Norris motor that we could use with the Panavision to run at time-lapse frame rates for added flexibility. Working with a really small crew of five, and sometimes four, we shot mostly in natural light but carried a small lighting package and had some sound recording capability as well.

We were out collecting imagery for about three years, then came back and started the editing process. There are several key elements in the way the film is structured, but within that broad framework there are many ways it can go together. Because this is nonfiction imagery, it brings with it a kind of essence and energy, and evaluating the reality of the imagery in its totality points you hopefully towards the best end structure.  In some ways our job is to find the film within the material.

We chose to edit the film in silence, unlike Baraka, and addressed the music after the film was completely edited. It was a severe process in some ways but forced us to really be efficient with the use of the footage and get the film working visually and structurally before bringing in the music. Our composers, Michael Stearns, Lisa Gerrard, and Marcello De Francisci, then did a phenomenal job of adding layers and depth to the viewing experience. Their contributions brought the film to a level that we could not have contemplated. Music is the emotional guide in these films and serves as a main character, equal in importance to the imagery. Scoring the edited sequences after they are constructed also means that the music works as a whole. We do not want to augment every edit with a musical highlight or micro-manage an emotional commentary.

We edited the film in short sequences, usually three to four minutes, of like material and subject matter. These sequences are the building blocks of the film and could be moved around easily to try different orders. The process is a little scary as we are working with very little that is written, but is also exciting as there are opportunities to find connections in the editing process that you could not possibly have planned. We had more of a written treatment when we made Baraka, but we departed from it in the end based on the reality of the imagery we had. Having been through that, we were somewhat more relaxed with Samsara. Ultimately in this kind of filmmaking, it is the reality of the imagery that you have that you make the film with, not a detailed written storyboard or treatment. We are true to the aim and themes of Samsara but have allowed it to be expressed in an intuitive way based on the sequences and the way they connect together.

The goal is to create a seamless flow that moves you through the film and maintains a kind of inner feeling that is not interrupted by a sense that the filmmakers are imposing a judgment, political point of view, or a belief system on the viewer-rather, letting the essence of the imagery reveal itself. It is meant to be a journey that leaves space for the viewers to bring some of their own inner dialogue to the experience.

Mark Magidson is producer and with director Ron Fricke, editor and writer, of Samsara. 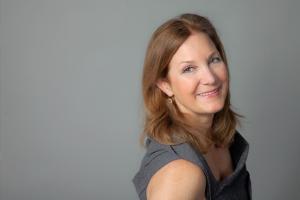 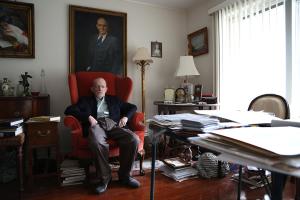 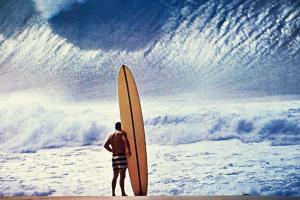 Jul. 30, 2004Feature
Gotta Surf Somebody: With 'Riding Giants,' It's Not About the Waves
Read More