OVID.tv, A New Online Distribution Collaborative, Is Set to Launch 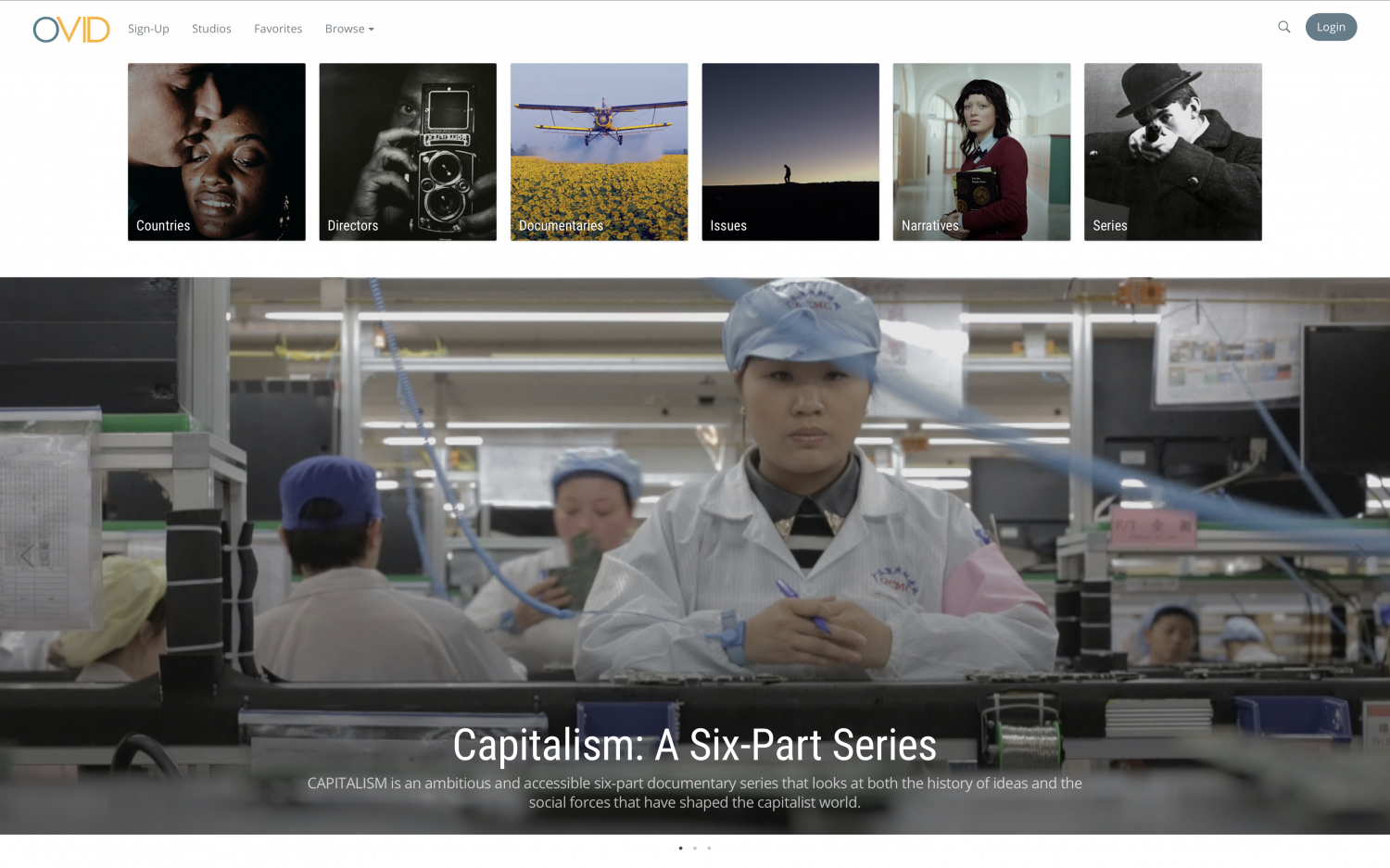 The elephant in the room is Netflix. Just ask Marc Mauceri, vice president of indie film distributor First Run Features. This sentiment is reflected by his collaborators Jonathan Miller, president of Icarus Films, and John Hoskyns-Abrahall, founder of Bullfrog Films and owner, along with Icarus, of Docuseek, an SVOD (subscription video on demand) streaming platform for colleges and universities. They, along with Distrib Films US, an independent distributor of international feature films; KimStim, a Brooklyn-based company run by Mika Kimoto and Ian Stimler; and the newest of the bunch, Grasshopper Film, founded in 2015 by former Cinema Guild head Ryan Krivoshey, comprise the six founding partners of OVID.tv, a new SVOD service set to launch on March 22.  (Editor's Note: Just prior to publication, OVID.tv announced that Women Make Movies, the world’s leading distributor of independent films by and about women, and dGenerate Films, the leading distributor of contemporary independent film from mainland China, have agreed to join as founding content partners.)

Even as Netflix invites controversy by encroaching on theatrical distribution territory, it remains on the top of the heap in terms of SVOD audience reach. Following closely behind is that other juggernaut, Amazon Video Prime. Even HULU, in third place with about 20 million subscribers as of 2018, has had an impact on all other forms of film distribution, including theatrical and broadcast television.

In the early days of mass-market DVD distribution and online streaming, Netflix was the only game in town. In 1998 they launched their first website, offering 925 titles available to rent. Two years later they moved to the subscription model, which has dominated the field of online media distribution ever since.

As the digital revolution heated up, pundits predicted the demise of audiences for theatrically released indie films. Although this prediction turned out to be premature, audiences did decline, some art-house theaters closed, and filmmakers expected that distributors would get their films on Netflix in order to reach an audience numbering in the millions. Initially, the revenue-sharing arrangement between Netflix, distributors and filmmakers was workable. Netflix was eager to take on titles, and, in part because there was less for consumers to choose from at that time, emerging filmmakers had an opportunity to be discovered. Getting a film on Netflix was seen as a seal of approval among indie and documentary filmmakers.

How things have changed. Current statistics demonstrate a dramatic shift in priorities. In 2010 Netflix had a total of 6,755 movies and 530 TV shows, according to Flixable, a third-party Netflix search engine. In 2018 the number of TV shows, including original productions, has almost tripled to 1,569, while the number of movies has drastically declined and now stands at 4,010. The writing is on the wall. Distributors and filmmakers are taking notice.

Many of us are still mourning the November 2018 demise of FilmStruck, the AT&T-owned SVOD service for Turner Classic Movies and the exclusive online streaming home of The Criterion Collection. Although FilmStruck was short-lived, its demise was a catalyst, a wake-up call to smaller distributors. In response, Criterion announced their own SVOD service, set for an April launch. However, they were not available to speak on the record for this article about their pending launch. It may be serendipity, but OVID.tv has stepped in to help fill the void.

They will have to compete with the likes of other niche SVOD services like Mubi and the Prague-based documentary platform DA Films. The six founding content partners of OVID anticipate their combined experience and diverse collections, along with the technological wherewithal supplied by their equity partner Docuseek, gives them a leg-up in the fractured film distribution marketplace. Criterion might well consider the advantages of eventually joining this partnership, rather than taking the go-it-alone approach. How this will all shake out remains to be seen.

“The struggle is to maintain relevance in an ever-shifting marketplace,” First Run’s Marc Mauceri, attests. In order to succeed, he, Miller and Hoskyns-Abrahall, all well-seasoned survivors of indie, foreign and educational film distribution, each have curated a distinctly different catalogue of titles to appeal to a dedicated following. Mauceri sees that his strength is partly based on his commitment to maintaining a “singular vision; we don’t answer to shareholders,” and “unlike Miramax, we haven’t grown into a huge conglomerate that suddenly goes BOOM!” He is sanguine when he admits, “The kinds of films we love will never have a huge audience.”

Mauceri ruefully reflects on the way formats, driven by the digital revolution, have so quickly fallen out of favor. “Ask anyone under the age of 25 about DVDs and they’ll say ‘What???’ ” Any distributor in business since the transition from film stock to videotape knows that switching formats is a long, expensive, arduous and often unclear process. I remember in 1993, when I had recently taken over as executive director of Documentary Educational Resources (DER), filmmakers were insisting that we distribute their films on laser disc. They loved the way their 16mm film looked when converted to laser disc and were sure this format would usher in the future of distribution. I was not convinced. It was expensive, cumbersome and not user-friendly. Luckily, I was right. It never caught on. CDROM was hot for a while, especially in academic circles. It accommodated text (academics LOVED that feature) as well as moving image. Textbook publishers started to rely on it as a way of appealing to visual learners, presaging the visual digital onslaught in education and all other aspects of the media marketplace today. Around 1996 DER made the commitment to digital video, bought our first AVID editing system and began the painstaking process of converting hundreds of titles from VHS to DVD. Now DVD is in its twilight; streaming has won the latest round in the media-delivery wars. There are winners and losers in each battle. The ground is littered with distribution companies who bet on the wrong process, or were not quick enough to see change coming.

To maintain its streaming platform for educational and institutional customers, Docuseek has already encoded and uploaded a significant number of titles from Bullfrog Films, Icarus Films and KimStim. All are content partners under the OVID.tv banner. This is a definite technological advantage, easing any pain that format conversion inflicts on distributors. The Docuseek website has a clean, contemporary look and is easy to navigate. This is promising, since they, as the founding equity partner, are responsible for building out the front end of OVID.tv.

In a fiercely competitive marketplace, the friendliness and cooperation exhibited by all the principal players that now comprise OVID.tv is pretty remarkable. Icarus Films’ Jonathan Miller explains that they speak with each other on a regular basis. Mauceri reiterates, “I really respect our content partners. We are all friends.” They have built trust based on long-term relationships, and through Docuseek they have a firm footprint in the educational market. Now the goal is to expand that reach to the individual consumer.

Having buy-in to this new venture from their filmmakers is another crucial component required before any serious changes to distribution contracts are negotiated. In most cases the rights for SVOD had already been secured. Some indie filmmakers who opted for a DIY approach and retained DVD and consumer streaming rights are discovering that getting the word out is almost impossible without a theatrical release in a market that is flooded with new titles every year. Distributors offer greater visibility. Bullfrog Films’ Hoskyns-Abrahall indicated that participating filmmakers “have been most enthusiastic about the opportunities to expand their audiences and perhaps generate more revenue than is currently possible, especially when considering the major SVOD services like Amazon Prime pay six cents an hour.”

What’s in a name? As any marketer knows, names for new products and companies are crucial. OVID is not an acronym, although it certainly could stand for something like Online Video Indie Distribution. It has a closer relationship to Icarus, the son of Daedalus in Greek mythology, who flew too close to the sun on wings made by his father and came crashing to earth. Luckily, Icarus Films has not suffered the same fate. They are still flying high. This OVID alludes to the first-century Roman poet who wrote songs of love. Perhaps the founding partners are hoping new audiences will fall in love with the films on OVID.tv.

At launch, OVID.tv will offer a selection of about 400 titles, 98 percent of which will be documentaries. Bullfrog will be contributing issue-based films with in-depth collections on climate change and economic justice. They will be adding new titles in “waves,” starting in April with a host of fiction features, along with a series from KimStim about wine, and auteur docs by Wang Bing from dGenerate Films, a Brooklyn-based distributor of award-winning independent films from China.

As of this writing, the monthly subscription price for OVID was still being discussed, but it will likely be about $6.99, with a yearly option of $69.99. This is subject to change. The six founding companies are each bringing their unique strengths and dedicated following to the project. Several other distributors have expressed interest in joining the OVID collective, but are taking a wait-and-see stance. As Richard Brody observed in the February 21st edition of The New Yorker, “The danger, in the long run, is that Netflix and a few other prominent distributors will exert excessive control over what’s made and seen and will function as studios did in the nineteen-thirties, or even as they did in the seventies and eighties, when independents existed only at the margins of the industry.”

While there is always some element of risk in any new venture, Hoskyns-Abrahall asserts, “We intend OVID.tv to be a haven for independent film.”

END_OF_DOCUMENT_TOKEN_TO_BE_REPLACED

A Conversation with Kanopy Founder and CEO Olivia Humphrey