A Portrait of an Artist: 'Heaven Is a Traffic Jam on the 405' 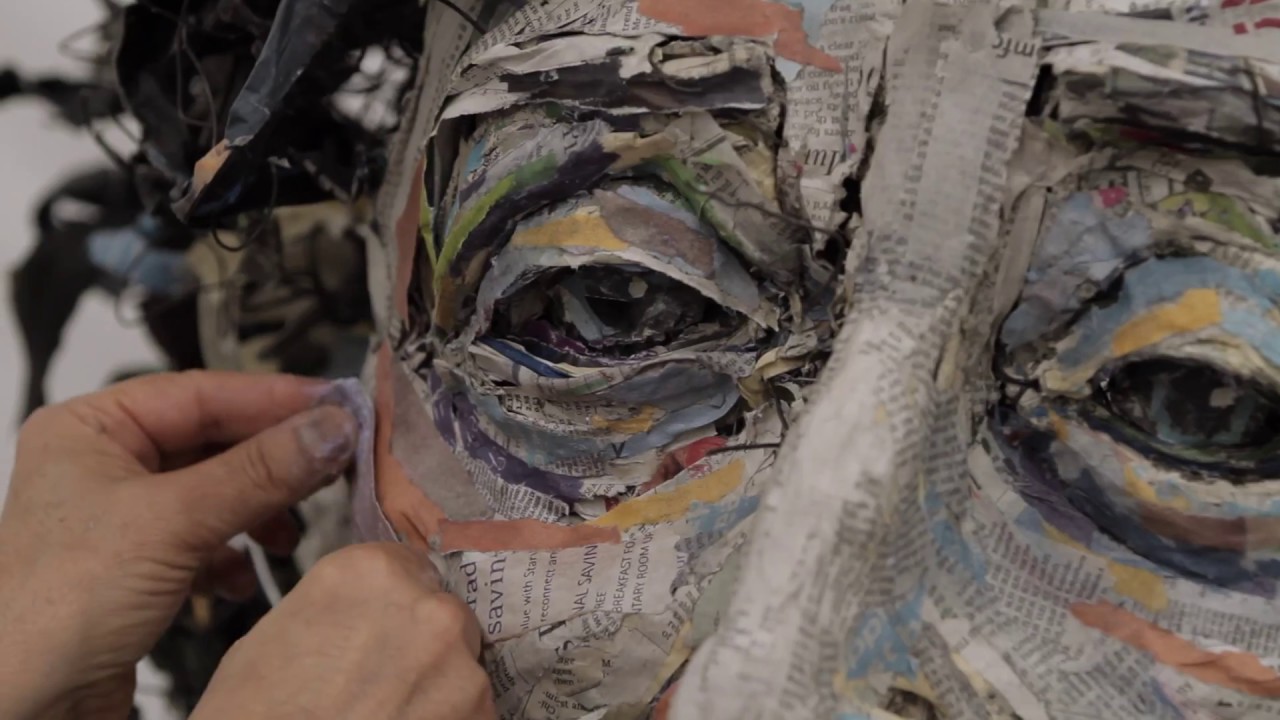 One of the five films nominated for Best Documentary Short Subject at this year's Academy Awards, Frank Stiefel's Heaven Is a Traffic Jam On the 405, takes its title from its protagonist's unusual description of bliss. The 57-year-old artist Mindy Alper perceives her environment differently than those around her, channeling all manner of anxiety, depression and trauma into vivid, intensely human sketch drawings and large-scale papier-mâché sculptures.

Stiefel's film is an intimate portrait of a complicated individual, attuned to the ways that art-making can assist the sometimes painful process of self-scrutiny and emotional revelation.

Documentary spoke to Stiefel by phone from his home in Los Angeles.

I want to know a little bit about your own journey to filmmaking. I know it's not your first career.

Frank Stiefel: No, I spent the last 35 years as an executive producer in the TV commercial business, and for much of that time I owned a company named Stiefel & Company. In 2002, I sold it to Radical Media, and I became an executive at Radical Media. Seven or eight months after that I went to a lecture that my mother was giving, having to do with her experience as a deaf Holocaust survivor. I had heard all of those stories growing up, but I'd never heard it as one narrative. It was the first time I had recognized how all of those pieces interlocked. At some point, I decided to do a film to give my kids. Then it became a bigger deal.

Actually, there is a great IDA component to this story. I decided to make a doc, [but] I had never made a film. The editor had been an assistant, the composer was 16 years old. As the edit was crawling forward, I said, "You know what? The IDA's got this thing called DocuWeeks, and the last day that I can submit is May something or other. I'm going to submit this film no matter what shape it's in. So let's try and make sure that it's in pretty good shape." So, I submitted it on the last day. The IDA at the time was downtown in a studio complex, and I handed the envelope to the receptionist, forgot about it, and a couple of months later I was in New York with one of my daughters and my wife and we're sitting at a Broadway theater. I'm shutting down my phone, and an email comes in from a guy named Michael Lumpkin [IDA's former executive director] telling me that I was now in DocuWeeks. Boom! I was now a documentary director.

So, at that point it went from what could have ended up being a home movie for your family into a new profession?

Yeah. It changed. Some months later I retired from being an executive producer and decided to focus on this. It also changed my mother's life. The story that nobody knew, that she hadn't told anybody, was suddenly out. She was interviewed in newspapers and magazines, and the last few years of her life were a lot about the film because whenever I could, I'd bring her to a festival that didn't require so much travel and we would do the Q&As together. My wife and I refer to this as the Oprah-ization of my mother because she became very, very comfortable in front of large crowds of people. That was where the shift happened.

With the new film, I understand that when you met Mindy Alper, your wife was in an art class with her?

My wife would come home and tell me about this woman who sits quietly in the back of the studio and doesn't speak to anyone, but produces this extraordinary work. Then, I think they had a group show, I went to see the stuff, and was knocked out. I would see her at art openings and just wondered why she was the way she was. I said, "Can I shoot you making that sculpture?" That's where it began. So after a few months of filming her making that huge sculpture, we had the first interview, which led to five other interviews. And the story just got deeper and deeper.

From the film, it's sort of hard to gauge how well-known she is as an artist. Is she someone who can make a living from selling her art? What is her status in the world of contemporary art?

It's very uneven. As you can imagine, she's not even. That's the biggest issue. For about a year and a half following that opening, she produced nothing. Then she decided that she wasn't going to do any drawings and she was bored with papier-mâché, so she taught herself how to wood-carve. She's in the process of learning how to carve wood, so she's making very small, very intricate things out of blocks of wood and looking at YouTube videos. The way a professional might think about producing art is, "Okay, my audience wants me to do this. I may not want to do exactly that, but that is where I can make some dough." And she has none of that; that thinking is far too organized. So, there are periods where she can't produce any work because she's crippled by either anxiety or depression.

There are periods where she becomes curious about something that's a tangent. I think that the last drawing she did was for that film three and a half years ago. She hasn't made any papier-mâché since and so, to answer your question, there is not a show scheduled for her right now because she wouldn't have anything to show. She's not concerned. She's concerned in that she gets disability and she gets money from her mother and she lives a very small life.

Right. Some of those pieces exist. It would thrill me beyond belief if that sculpture of her psychiatrist sold—which, I have to say, is a fucking extraordinary piece of art.

You would also need a big house to hold it.

Yeah. The answer is that if a collector really saw what the potential value was of some of those pieces and bought them because they're relatively inexpensive today, that would be thrilling. I'm concerned about her. I'm concerned about her after her mother dies, and while they provide a little bit for her, it's tenuous as to whether she'll outlive the money that she has.

The film clearly isn't interested in contextualizing Mindy in the world of contemporary art, and it also isn't interested in naming the particular psychological challenges she faces. So what were the questions driving you in making this portrait film?

First of all, let me just that say in 20 hours of interviews, the question I vowed I wouldn't ask is about a condition. I wasn't interested in a diagnosis. I wasn't interested in a definition because I thought you could dismiss her more readily. You could say, "Oh, she's got what Uncle Jerry's got." So, I was interested in you meeting a person and not an illness. I actually intentionally didn't ask the question; I'm actually not interested. The conditions that she has are the conditions that many of us have, but just to the 10th power. So, I just wanted you to meet somebody who's seemingly as different, but probably not so much. That was my intent. The other thing is that we all throw around psychological terms because we think we know what they mean. But they're actually technical. We're very glib about the use of terms that we actually don't understand.

Did you always know this was a short film as opposed to a feature?

No, my first cut was 84 minutes. My second cut was 62 minutes. At 84 minutes, I knew I was lost. At 62 minutes, it was a good film. I remember turning to the editor and saying, "What happens if we just take out everything that's merely interesting? What happens if we just go with the stuff that propels the story and just take everything else out?" By then, it got to 43, 44 minutes and so, I just figured, "Okay, if this is where it is, then we might as well go for 40 minutes." So, I didn't have a position as to whether it was a feature or not. My instinct is that it's not a subject. It's a portrait of somebody who's not famous. I don't know whether that's a feature. I think the short doc form is actually perfect for this kind of film.

Anytime I see an interesting film about an artist, I'm always looking for consonances between the filmmaking and the artistry of the subject. In this case, because we're focused on Mindy's portraits of her psychologist, she does that portrait of you in the car, at the same time you are also making a portrait of her. Were you thinking at all about working through the same process that she's working through?

I think the process was actually similar and it was very interesting to spend as much time in an art studio as I spent while I was filming her making that sculpture. The reason was that nobody there really knows what they're making. Nobody's plotted out what this necessarily is going to look like; everybody's in process. That was a good place for me because for so long, I didn't know where the film lived. I didn't know what this was going to necessarily be about. So, to be among people who had some confidence that what they were doing would emerge was good for me. I think the thing that she says when she's giving the class, her brief on how she felt this way—she felt that it failed because it didn't depict her heart.

She had a thing that she felt it missed while everybody else thought, How do you take wire and paper and make something that's this human? I think she was going for a truth and I think that's what this is, that's what making these kinds of films are. Is this a truth? Is this my truth about who she is? I think that's what's common. Photographic portraits are always interpretive. If you shoot something that feels like that person, that's a good portrait. If you shoot something that doesn't feel like that person, well, that's a revelation. It's interpreted by the person who's looking at the picture. I think that the process of wanting some sort of truth is what she was going for, and certainly what I was going for.

Heaven Is a Traffic Jam on the 405 screens at IDA's DocuDay on March 3 at 8:00 p.m. at the WGA Theater in Beverly Hills.