The Road to Sustainability: Midwest Summit Participants Continue Journey to a Viable Future 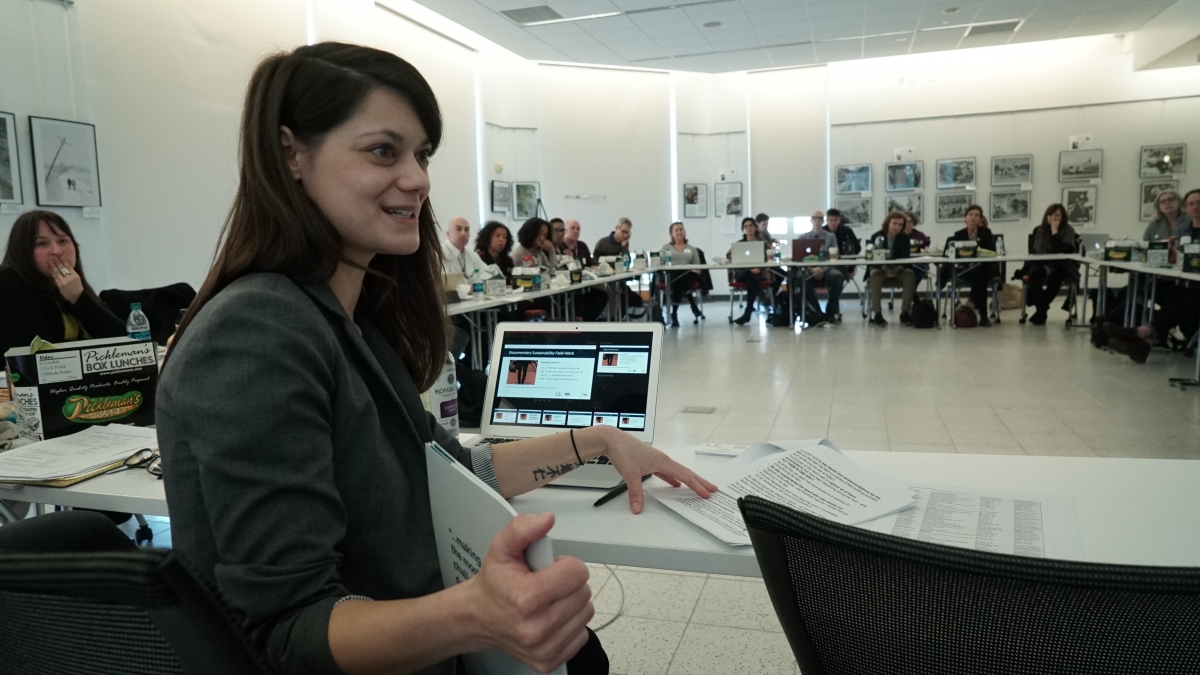 Ashley O'Shay, a recent graduate of Northwestern University, found a compelling subject in her own backyard for her first feature-length documentary. In 2015, she scraped up as much funding as she could, grabbed a camera and captured the lives of several female African-American activists in Chicago.

Three years later, she is seeking funding to finish Unapologetic.

"Here in 2018, I have raised close to $50,000," O'Shay said. "I have received support both from individuals and a number of professional development organizations. I am grateful for the support of these eight programs, yet my film is only 30 percent of the way funded. What's wrong with this picture?"

That question was on the minds of more than 40 members of the documentary community at "Heartlandia: A Summit on Documentary Industry Sustainability in the Midwest." The event was held on March 1 at the University of Missouri School of Journalism. Sponsors included the IDA, Kartemquin Films, the True/False Film Festival, Based on a True Story and the Jonathan B. Murray Center for Documentary Journalism. The event continued a conversation that was initiated at the Documentary Sustainability Summit in early 2017.

O'Shay hit upon what perhaps is the most critical issue facing filmmakers today, said Jax Deluca, media arts director for the National Endowment for the Arts. "Making a living is the most pressing challenge facing documentary filmmakers," she added.

O'Shay, as a young African-American woman, is grappling with sustainability issues for the first time. Others have been dealing with them for years, said Gordon Quinn, who founded Kartemquin Films in Chicago more than five decades ago.

"What we are doing here has a historical context," he explained. "We can change our field. We can make it what we want it to be. People need to know that we have had big victories in the past. The first step is to understand where you are and to understand what your problems are. It's very important to join the organizations that represent your field. If there is a union, join that. If there is an IDA, join that."

Filmmakers can take heart from Quinn's persistence. He traveled from the summit to Los Angeles for the Academy Awards, where two Kartemquin films (Edith+Eddie and Abacus: Small Enough to Jail) were nominated in the documentary categories.

The summit coincided with the opening of the True/False Film Festival. Co-founders Paul Sturtz and David Wilson have witnessed the challenges filmmakers face since they started the event in 2004. "We are great admirers of the people who have stuck it out year after year, making great films," Sturtz said. "We truly believe nonfiction filmmaking is the creative molding of the reality around us. It's a microcosm of how we can shape the world. It's beautiful, and it's incredibly difficult to do. To do it well over time is nearly impossible."

He is only half-joking when describing the pain of making a film. "The films that we love always have this bittersweet backstory," Sturtz noted. "It's the story of ruining our lives and ruining the lives of everyone around us. Unless you ruin your life for two years, you probably haven't made a very good film."

Festivals such as True/False are a piece of the sustainability puzzle, Wilson maintained. Organizers have been able not only to cover travel expenses for filmmakers but this year True/False provided each entrant a stipend of several hundred dollars. The opportunity for peer support and networking can be just as valuable.

"What we are most proud of is being able to place this event here in the middle of America and draw the whole world to it," Wilson asserted. "We want to engender, build and be part of this whole idea that there is a community of filmmakers, and that community can support each other in all of these different ways—sometimes a shoulder to cry on and sometimes a whole network to figure out the best strategies and funding for projects."

O'Shay found that she needed that shoulder to cry on as well as funding strategies. Her story typifies how difficult it can be to develop a labor of love into a finished product. "I entered this experience not knowing the depth to which I would need support—not only funding but also knowledge of documentary filmmaking, coming in as a young, first-time documentary filmmaker," she admitted. "So many things were going on at that time that I really didn't have the space to wait on funding."

Perhaps her biggest challenge was keeping her personal bills paid while immersing herself in Unapologetic. O'Shay lived with a friend, drove for a food-delivery service and worked part-time for a theater. "This really decreased my time to be able to work on the project, while creating a revenue stream to be able to support myself—and move out of my friend's living room," she explained.

A fellowship with Kartemquin encouraged her professionally, and she raised $9,000 during an initial crowd-sourcing campaign. However, she found that even sympathetic funding sources often are stretched thin. "Many people have capacity issues when it comes to supporting filmmakers," O'Shay said. "They are extremely well intentioned, but there's just not enough to go around."

She also found that fundraising can be a chicken-and-egg experience. The more money that comes in, the more progress can be made on the film. And the more progress that is made, the more attractive the film becomes to investors. By the end of 2017, she had raised an additional $29,000, which enabled her to add much-needed professional assistance.

"I'm not sure who told me this, but there's a saying that anything less than $25,000 is enough to get you in trouble," O'Shay said. "By the end of December, the funds were quickly depleting, and I found myself needing finishing funds to complete the film."

Although O'Shay is optimistic about securing funds to complete the project, she also has concerns about the long-term sustainability of her profession. "Incubating and supporting the next generation of filmmakers is extremely important to continue the long legacy of nonfiction filmmaking that is taking place," O'Shay maintained. "I feel I have aged 10 years in knowledge, but I also find myself asking what of significance can happen without financial backing. We need to talk not only about not how funding issues are affecting the filmmaking community but also who is being left out of the conversation because they don't have the same privileges as me to be able to put their skin in the game."

Summit participants had no magic formula for long-term sustainability, but that was not the intent of the meeting. Engaging and maintaining dialogue is the important first step on the road, stressed Steve Bognar, an independent filmmaker with Community Media Productions in Yellow Springs, Ohio. "Filmmakers get together and just complain about not having money," he observed. "It can be a depressing conversation. The work we make can take years and years, and sometimes you feel you are more like a fundraiser or administrator than a filmmaker."

Bognar led a breakout session of filmmakers who came up with several concrete ideas to boost sustainability; Bognar elaborated below:

• Reach out: "Looking beyond your own community to activists, visual artists and others is a way to get energy and find ideas."
• Share: "I'm broke and you're broke, but maybe there is a camera between us that we can share. I'll be your crew person, and you can be my crew person. Not only does the work progress, but we are building community."
• Team up: "There is something in Chicago, New York, Toronto and elsewhere called Good Pitch, where an organization comes to the foundation and says, 'Come to this event and these 20 filmmakers are going to pitch to you.' All of the foundations are there together to hear the pitches, which is so much easier for the filmmakers. They don't have to drive to Chicago and then fly to New York or wherever. Could there be more opportunities like that?"
• Pursue excellence: "Don't let go of the work until it's really good. In filmmaking, the good part could mean three years, five years or seven years on one film. But if the work is good, it usually gets out."

The bottom line is that the journey to sustainability remains just that—a journey. "We all have a role to play in our ecosystem," Deluca maintained. "Together we have some collective power to build a future of sustainable ecosystems for our industry."

Bognar believes events such as Heartlandia promote a clearer understanding of where the industry is, where it needs to go and how it can get there: "The daunting realization we came to is that the two things that are key to a sustainable life in this profession are time and money. These are the two essential needs, and there is not a brilliant solution for how to get them."

Alan Goforth is a freelance journalist, author and aspiring screenwriter in Lee's Summit, MO. He is a graduate of the University of Missouri School of Journalism.