A Brief History of the IDA Enterprise Documentary Fund 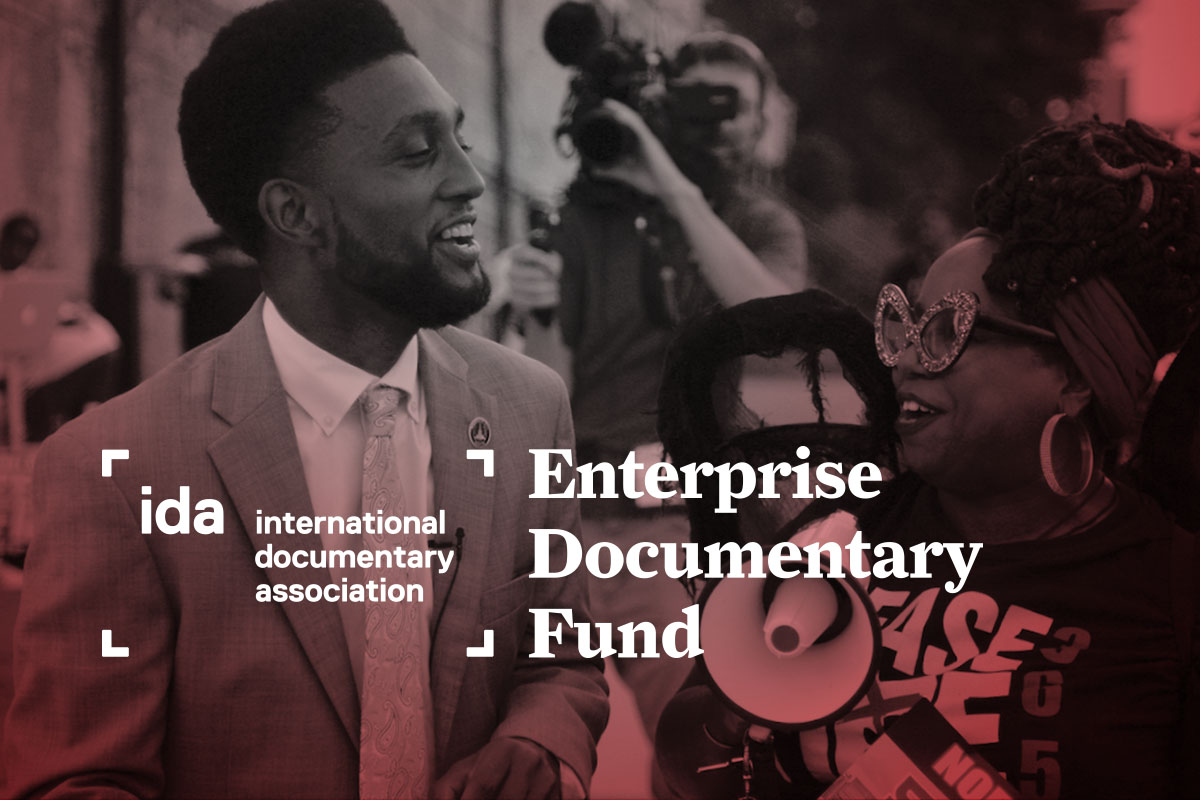 In this 40th anniversary year of the International Documentary Association, and on the eve of the IDA Enterprise Documentary Fund 2022 open call, it seems an apt moment to reflect upon the fund’s history. Launched at Sundance in 2017, the IDA Enterprise Documentary Fund was the realization of extensive research, ideation, and collaboration between IDA’s then Director of Funds, Carrie Lozano; former Executive Director Simon Kilmurry; and our liaisons at the John T. and Catherine D. MacArthur Foundation. The intentional collaboration and rigorous research that brought the Fund to life set a standard for IDA’s approach to fund development that continues to guide the way we undertake grantmaking to this day.

Think back to 2017. This was the year when the world was officially introduced to the perplexing concept of “alternative facts”; it was also the year when a concerted effort was undertaken to actively undermine not only journalistic credibility but the physical safety of journalists and their sources. As Carrie Lozano wrote in 2017, “In the face of an all-out assault on the press, IDA is committed to standing behind the independent storytellers and watchdogs that make up our community.”

The question of how journalistic practice and documentary film can/do/should relate has been central to the IDA Enterprise Documentary Fund from the beginning. The 2015 report,  “Dangerous Documentaries: Reducing Risk When Telling Truth to Power” from the Center for Media and Social Impact was a key inspiration for the development of the fund. The CMSI study interviewed long-form nonfiction filmmakers, their lawyers, insurers, producers, and programmers to understand what kind of support is needed for filmmakers who take on projects that expose them to the risk of retribution (think Citizenfour or Blackfish).

“Dangerous Documentaries”  introduces the question: “Filmmaker or Journalist?”. Then, after extensively outlining the similarities and differences between the two practices, recommends that filmmakers and journalists attempt to “reduce cultural differences between journalism and filmmaking” in order to harmonize efforts at supporting courageous work and shifting policy.

"The grant’s focus on journalistic practice validated our approach and led us to formulate our journalistic and investigative methods in even more depth."

Despite this recommendation, Lozano recalls that during the series of panels, meetings, and interviews that shaped the fund, “There was frequent, sometimes surprising, pushback to the notion that documentary filmmakers are also journalists.” In the years that have followed these heated debates, the IDA Enterprise Documentary Fund has fulfilled its mission to support “in-depth explorations of original, contemporary stories that integrate journalistic practice into the filmmaking process” and has funded a wide range of films that put the fields of journalism and filmmaking into dynamic relation with one another. Examples include Nanfu Wang and Jialing Zhang’s One Child Nation and David France’s Welcome to Chechnya and the more recent Riotsville, USA by Sierra Pettingill and Isabel Castro’s Mija.

“Receiving the IDA Enterprise Grant was a game-changer for our film Another Body,” says producer and 2021 Enterprise grantee Elizabeth Woodward. “The grant’s focus on journalistic practice validated our approach and led us to formulate our journalistic and investigative methods in even more depth. The stamp of approval that the grant provided also allowed us to develop and widen our networks in the journalistic community, which is crucial for our film and impact campaign.”

Last year, IDA added a question to our open call application that directly addressed the issue of authorship. The question sought to understand each creative team’s connection to the story they wanted to tell and to the community involved. Former IDA Director of Funds, Poh Si Teng, called the addition of the authorship question “an important step towards our collective evolution as a more inclusive documentary community.” The effort to evolve our practices toward greater inclusivity continues this year with the upcoming release of a revised Core Application that includes more thoroughly articulated questions about authorship and equity.

Each year that we run our open call for the IDA Enterprise Documentary Fund, we not only get the chance to engage with incredible projects and their teams, but also have the opportunity to improve the way we respond to the needs of the field.  As we begin this year’s open call, we do so with a commitment to working even harder to build community among our grantees, meaningfully soliciting and acting on feedback, as well as adapting the fund, and our stewardship of it, to better meet filmmakers' needs.

We will be creating stronger alumni networks so that our Enterprise Grantees can build power together and share knowledge about how to navigate this ever-changing landscape of documentary film. While our Enterprise Fund currently offers grantees pro bono legal support from the Reporters Committee for Freedom of the Press (RCFP) and the UCLA Documentary Film Legal Clinic, we want to understand what other types of non-monetary support we can facilitate to help filmmakers complete their projects. Another goal we have in the coming years is to build power among grassroots organizations working in the field, and create broader access not only for filmmakers at different stages of their careers, but also for films in different stages of production.

We’re working intentionally and persistently to anchor our granting practice in a trust-based approach that centers relationships, sustainability, and shared values throughout the process— from ideation and research, to evaluation. The thought is that through the accumulation of relational intentionality and the development of robust coalitions of care and communication, we can hold space for each other and our work in ways that currently feel daunting or too much to bear. How do we adapt our inherited work flows and organizational “common sense” to truly meet the needs of the time? The question of this change is not one of will—there seems to be will in abundance—but one of infrastructure.

Keisha Knight is the Director of IDA Funds & Enterprise Program.