Where Are They Now? Pare Lorentz and Enterprise Documentary Fund Grantees 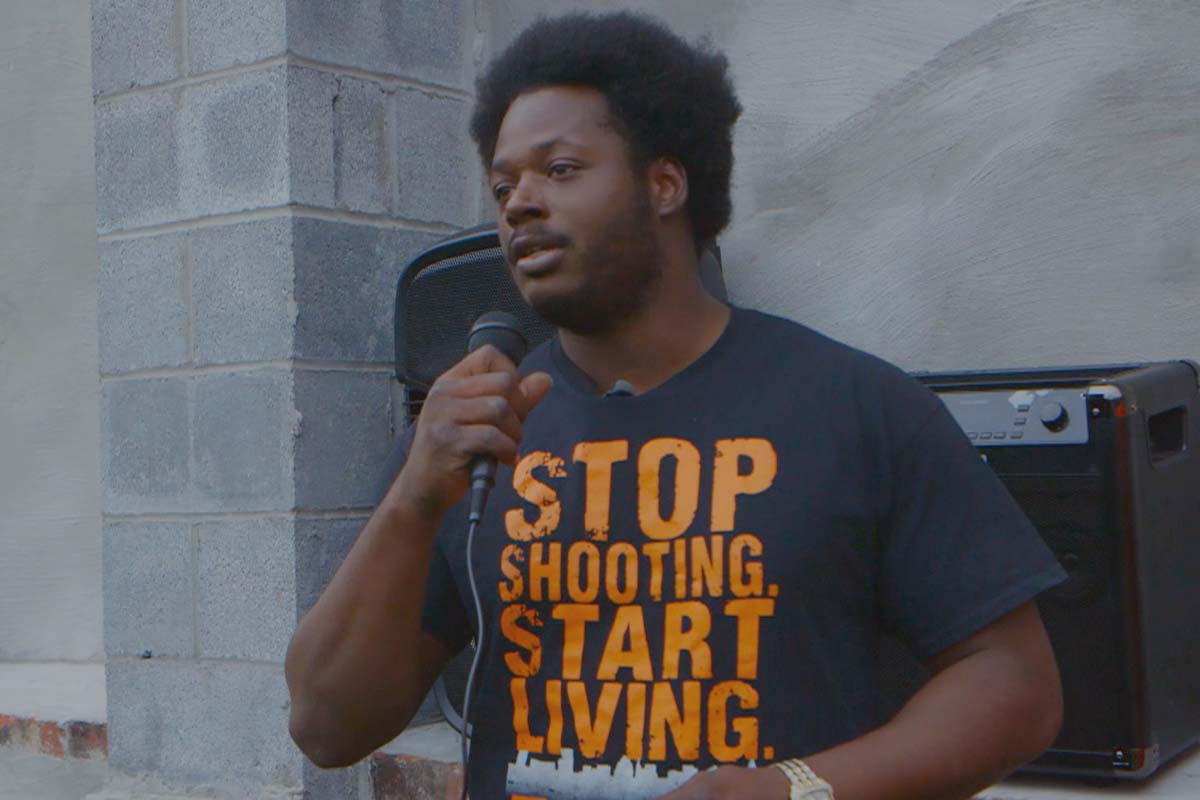 Having served as a fiscal sponsor since 1986, and having helped thousands of independent filmmakers get their work funded and seen, IDA began in the late 2000s to investigate a new role: grantmaker. The IDA Funds program had its origins in 2011, thanks to the New York Community Trust, which, having funded the Pare Lorentz Award, stepped up with the Pare Lorentz Documentary Fund, which supports feature-length documentary films that illuminate issues in the United States and focus on select issue areas that were hallmarks of Pare Lorentz's films.

Six years later, thanks to the generous support of the John D. and Catherine T. MacArthur Foundation, IDA launched the Enterprise Documentary Fund to support in-depth explorations of original, contemporary stories that integrate journalistic practice into the filmmaking process.

The IDA Funds program continues to grow. The Netflix Global Emerging Documentary Filmmaker Award, for a filmmaker from Brazil, Mexico, South Korea or India, and the IDA+XRM Media Incubator, which supports short vérité documentary films from around the world, joined our roster of grants over the past two years.

We reached out to the inaugural cohort of Pare Lorentz Documentary Fund and Enterprise Documentary Fund grantees to reflect on being the first-ever recipients of the grant, and to bring us up to speed with what they’ve been up to.

ACORN and the Firestorm
Directed and Produced by Reuben Atlas, Sam Pollard

It was not only a great honor to receive a grant from IDA in the name of such a legendary filmmaker, but it was also the first money in, so IDA provided an invaluable boost––to explore the downfall of ACORN, one of the most important community organizing groups in the country's history––and to my independent filmmaking career.

Since then, my career highlights have been finishing that film (I produced and directed ACORN and the Firestorm (ITVS/PBS) with Sam Pollard), directing and producing Brothers Hypnotic (ITVS/PBS), co-directing Sour Grapes with Jerry Rothwell (Netflix/Arte), developing a history film about the ACLU, and recently co-producing John Carluccio's Maurice Hines: Bring them Back. I'm currently working on a film about an NBA icon.

Beyond being a tremendous honor, winning the Pare Lorentz Award created the initial momentum for our film to gather the necessary support in both dollars and in institutional backing. As two first-time female filmmakers, this "first break" was both critical and pivotal, and I am forever grateful for what it meant for the film and for me.

Alongside a teaching career at USC, I've continued to direct and produce documentary films that focus on issues of social justice.

The Pare Lorentz grant was the first funding we received for the film, and it came as a critical juncture—right as we were beginning to edit. We were a cash-strapped operation but we knew how to stretch every dollar, so the grant took us a long way.

I was then and still am a cinematographer, working mostly in documentaries. All Fall Down was my first and only foray into directing. I don't know if I'll do more in the future. But I do know that I'm a much better cinematographer having gotten a chance to direct a film.

The Pare Lorentz grant was a game-changer for me in the sense that it not only enabled us to make As Goes Janesville, but that movie really kickstarted the second phase of my career. I had moved from New York  to Milwaukee and was only making my second film. The film went on to get an Emmy nomination and helped 371 Productions grow. We just finished and released, or are about to release three movies, and our company has grown by hiring BIPOC women who now are going on to make their own films. So you can really draw a line from the Pare Lorentz grant to not only my success but the success of others who have passed through 371.

I was in the same boat as many fellow documentary filmmakers. Even 25 years after making a pretty successful film like Who Killed Vincent Chin?,  it was still a struggle to raise money. Social issue documentaries exist in a market-driven universe, and No Más Bebés was a story with few elements that the market wants. It was a history, for one thing, about Mexican immigrant women who were forcibly sterilized at Los Angeles County hospital. It wasn’t character-driven but a collective story of a group of women who stood up alongside activists, civil rights lawyers and a whistle-blowing doctor. They were poor and working-class immigrant women whose stories were often made invisible. We were told by one funder that it was a local story, not a national one. Even within feminist narratives, reproductive justice issues of women of color such as sterilization had long been marginalized by the mainstream women’s movement. But the Pare Lorentz grant was mission-driven, not market-driven. That’s a huge, huge difference because the documentary can’t do its job of building new audiences, disrupting fossilized narratives or advancing new creative approaches unless there is support for films and filmmakers that are outside the market and the mainstream.

The grant was a real vote of confidence for us—specifically in how we wanted to approach making Remote Area Medical, but also in our general thinking on how to approach telling the stories of different peoples and regions in America. As fans of his films, being tied, in some small way, to Lorentz’s legacy remains a huge honor.

Since the grant we’ve gone on to direct two more features together: This Time Next Year and Feast of the Epiphany, as well as a number of shorts. We’re editing a story about a small town in Texas that we’ve been working on for some time. Farihah has produced a number of projects for other filmmakers and Jeff went on to win an Oscar for producing American Factory.

The Enterprise grant was one of our first industry grants on Charm City, and that show of faith in a difficult project was incredibly meaningful. Our team greatly appreciated being recognized as journalists, since we were working so hard to maintain journalistic integrity throughout our filmmaking process. And of course, the grant came with resources—like the pre-publication review from the Reporters’ Committee for Freedom of the Press—that was invaluable in helping us make decisions that protected the subjects and ourselves.

In recent years I produced Becoming, about First Lady Michelle Obama, and Dick Johnson Is Dead, by Kirsten Johnson—both of which I produced with my Charm City producer, Katy Chevigny. I also produced Anonymous Sister (also a recipient of an IDA Enterprise Grant; it  premiered at DOC NYC 2021), and I am executive-producing (along with Katy Chevigny), a 2021 Enterprise grantee project, The Untitled Baltimore Project.

In a world where grants are only getting smaller, the IDA Enterprise grant provides a substantial funding grant that can really move the needle on meaningful films with journalistic rigor at their core. Thank you for that!

We received a grant from the inaugural Enterprise Documentary Fund early in production of Enemies of the State, and it was a game-changer for our investigative film. We were able to do in-depth and long-term research, find and speak to sources, study court records, file FOIA requests and court motions, and follow the story where it led us, which was to some very unexpected places. For filmmakers who investigate original stories, a grant like the Enterprise Fund makes an extraordinary difference because it gives you the freedom to do independent research and cover the full scope of a story, and produce the documentaries in a timely manner.

Only months after Enemies of the State premiered at TIFF 2020, we finished our third feature film, United States vs. Reality Winner (SXSW 2021), another research-intensive investigative documentary. Currently, I have fiction film scripts in development and also a new feature documentary. None of them are easy projects, but they are all very important and I look forward to making them into films.

It was wonderful to get the IDA grant, and I’m still raising money for and working on the documentary. In the meantime I’ve been working a lot at PBS NewsHour Weekend, where I have been the senior producer, on and off. I’m also a producer/correspondent doing pieces mainly about music, and also criminal justice reform and climate change. Highlights have been profiles of Carlos Santana, Courtney Barnett, Rufus Wainwright, Nils Lofgren and more.

It was such an honor to receive a grant from the inaugural Enterprise Documentary Fund in 2017. Not only was I able to continue and finish Made in Boise, but to have such esteemed colleagues select my project and believe in me as a filmmaker was a dream. Importantly, I connected with many fellow grantees in my class. To this day, they are good friends and trusted colleagues that I lean on.

Presently, I am in post-production, after nearly four years of filming, of a coming-of-age sports documentary about Brighton Zeuner, one of the best contest skaters of her generation. The film is an intimate portrait of Brighton's teen life and the unique world of competitive skateboarding that she is a part of, as it becomes an Olympic event for the first time in history.

Receiving the development grant was the very first support I received for Mayor. It felt like an immediate stamp of approval, and a tacit statement of "keep going," —something I needed to hear from myself as much as from anyone else. Independent documentary is really the domain of the independently wealthy, and I feel like a constant trespasser, and this is especially evidenced by the lack of development funding. The IDA Enterprise grant was vital, when I basically had no other support. It was certainly a springboard that led to the film being completely funded by the end of production.

Since receiving both the development and production funding for Mayor, the film premiered in 2020, played at hundreds of film festivals, aired on POV and is currently streaming on Criterion Channel, MUBI and other platforms.

The Elevate Grant was pivotal for me as a filmmaker. It was the first grant that I received that was given with the option of solely supporting myself as a filmmaker, so I could for the first time assess whether my own finances should be prioritized over the project's. Fortunately, that year we had lots of backing for Always in Season, and I could use the funds to sustain myself at a lean time. That choice meant everything!

Since then, I completed a short film called Death Is Our Business in partnership with Firelight Media and FRONTLINE/PBS, which aired in spring 2021 and screened at the New Orleans Film Festival and Cucalorus Film Festival in November. The film takes viewers inside Black-owned funeral homes in New Orleans to see the shifts in burial traditions that have resulted from the restrictions of COVID-19 in a city that thrives on African American cultural practices and has been rocked by the toll of the virus.

I'm also developing a couple of new projects, while in post on a short film for Firelight and MTV and completing a series that I've spent the past year directing a couple of episodes of for another streamer.  It's been inspiring and energizing to also teach film, since the fall of 2020, in the Social Documentation MFA Program at UC Santa Cruz.

END_OF_DOCUMENT_TOKEN_TO_BE_REPLACED

Doc Star of the Month: Nicole Williamson, 'Made in Boise'