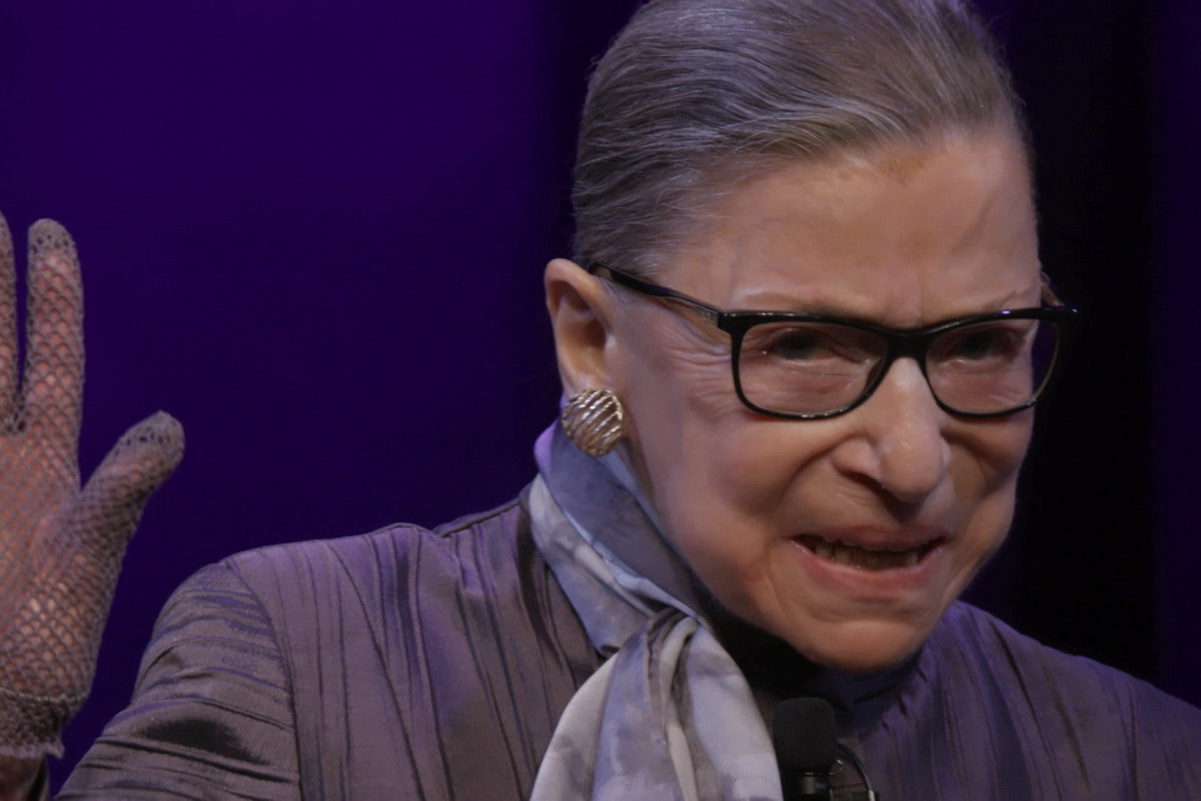 Essential Doc Reads is a weekly feature in which the IDA staff recommends recent pieces about the documentary form and its processes. Here we feature think pieces and important news items from around the internet, and articles from the Documentary magazine archive. We hope you enjoy!

“Like so many Americans, we are crushed by the death of Justice Ruth Bader Ginsburg,” West and Cohen said in a joint statement. “Even had she not become a Supreme Court Justice, Ginsburg earned a place in history for what she did to win equality for American women. When we asked her several years ago how she wanted to be remembered, she said with characteristic modesty, ‘Just as someone who did whatever she could, with whatever limited talent she had, to move society along in the direction I would like it to be for my children and grandchildren.’”

In a special section in the latest edition of Film Quarterly entitled “Powers of the False,” Marc Francis deconstructs the “bio-con” documentary in the age of Trump.

Different in form and scope, the documentaries all derive their ethical pertinence and exigency from the current US political context. More specifically, the bio-con documentary employs its notorious main subject as a proxy for Trump. Like Trump, Billy McFarland of Fyre Festival infamy and Elizabeth Holmes of Theranos obtained investors by lying about their products and output; Roger Ailes of Fox News built a media empire by constantly deceiving and misleading the public; Roy Cohn routinely lobbed false accusations against adversaries in order to wield power. Bio-con documentaries all track the egotistical self-construction of entrepreneurs and big shots who continually con others to advance their careers and positions.

Hyperallergic invited filmmakers Cecilia Aldarondo and Robert Greene to discuss how the COVID-19 pandemic has impacted their field, and what the future might hold.

Documentaries are inherently dangerous. When you introduce a camera into a situation, it changes things. But what happens when the world itself is dangerous? When the air around a filmmaker, camera, and subject can be loaded with contagion? When the problems of making films take a backseat to real questions of survival?

76 Days, from Weixi Chen, Hao Wu, and an anonymous third filmmaker, premiered at the Toronto International Film Festival to great acclaim. Its focus on the early months of the coronavirus pandemic in Wuhan, China, has caught the attention of The Atlantic’s David Sims.

It is no spoiler to say that in 76 Days, a calmer reality eventually surfaces. Frightening situations, such as when a woman gives birth and has to be separated from her baby because she has COVID-19, find happy resolutions. Not everyone who is wheeled into a hospital dies. Though the film wasn’t sanctioned by the Chinese government, it isn’t critical or investigative in nature; the documentary serves more as a testament to the day-to-day efforts of hospital staff and doesn’t dig into China’s initial downplaying of the disease. Still, the camerawork is surreptitious in a way that’s sinister and thrilling; it plays like a covert visual dispatch from a quarantined city that Americans could only read about in the early months of the pandemic.

Enslaved, a series currently running on EPIX, follows actor Samuel Jackson's journey to trace the history of the trans-Atlantic slave trade—and particularly the sunken slave ships that never perished in the Middle Passage. The New York Times’ John Eligon spoke to Jackson and his wife, Latanya Richardson Jackson about the urgency and relevance of this series.

We hope that the information and the knowledge give a greater understanding of who we are and sometimes why we protest and why things seem like they are the same. The same reason that people don’t allow people to forget the Holocaust, that if you let things go and start to forget that, they happen and they find a way to repeat themselves.

Writing in Nieman Reports, Cierra Hinton, Lewis Raven Wallace and Manolia Charlotin address what must be done in the Great Reckoning on systemic racism to transform white-dominant journalism organizations and institutions.

Finally, we must demand more from ourselves and our work. We need to harness the urgency of the Great Reckoning with intention, not settling for diversity committees and revised hiring policies at a time when we need ground-up, revolutionary change. Our intervention must get to the roots of the problems, not just their symptoms. As our colleague Mia Henry often says, journalists are always using our power either to oppress, or to liberate. How are you using your power in this moment?

From the Archive: February 2019: “Justice Is Served! The Notorious ‘RBG’”

Something we always wanted to do was to not save current-day, octogenarian RBG for the end of the film. We didn’t want to start at the beginning and say, Here she is, so young and ambitious, and then have the last 10 minutes be RBG now. We really wanted to be seeing RBG in her 80s throughout the entire film, keeping a strong sense of her as a proud, amazing, beautiful older woman.

Quibi To Explore Potential Sale Five Months After Its Launch

END_OF_DOCUMENT_TOKEN_TO_BE_REPLACED

In His Own Defense: Errol Morris on 'American Dharma' and Its Polarizing Subject, Steve Bannon