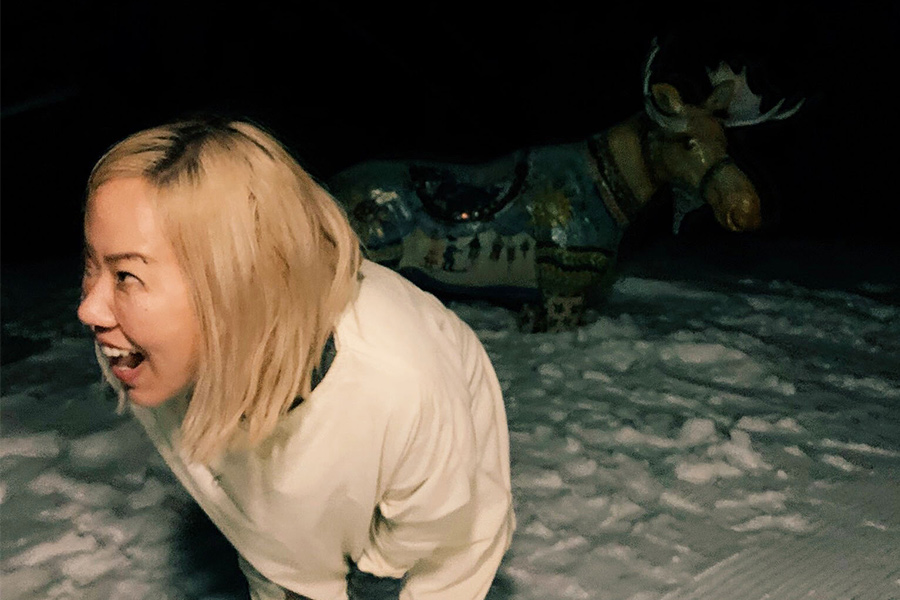 Sue Kim is the daughter of Korean immigrants. She was raised in Detroit, Michigan, and she graduated from UC Berkeley with a BA in English Literature. Before moving into documentary filmmaking, she spent 20 years as a commercial producer, making award-winning content for brands like Nike and Adidas. Her directorial debut, The Speed Cubers, follows the lives of two Rubik’s Cube-solving champions, Max Park and Feliks Zemdegs and the friendship that ensues. The film premiered on Netflix in July 2020, and has been nominated for a Critics Choice Award and was shortlisted for an Academy Award for Best Documentary Short Subject. Kim resides in Portland, Oregon with her son, Asher, and she is currently in development on her next documentary feature.

IDA: After a number of years working in production for the advertising world, what made you want to switch gears and transition into documentary filmmaking? Was creating documentaries always a goal of yours?

SUE KIM: Moving into the documentary world has always been a dream of mine, as nonfiction content has long been my favorite genre of filmmaking. But I never really thought I’d have the opportunity to make that transition myself, especially not mid-life and mid-career. It’s more common, yet still relatively rare, to go from the advertising world to the scripted world, just based on the scripted nature of commercials.

What ended up happening is that I discovered the speedcubing universe through my own personal life (my son is a speedcuber himself) and after having spent some years in that world, I stumbled upon Max and Feliks’ story. Initially, I tried convincing a few filmmaker friends that they should make a documentary about these two incredible individuals, but no one had enough interest in the project to actually commit to it. So at a certain point, I felt compelled to quit my job and make the film myself, purely out of desperation to make sure their story was told. And in the process, I fell in love with the alternating pure joy and intense torture of filmmaking. Ultimately, my transition to this side of the film industry was borne out of necessity and urgency, but I’m so grateful that it happened that way because I might never have had the guts to take such a leap of faith if I hadn’t been so invested in the story at the center of the film.

IDA: You ran a successful awards campaign for The Speed Cubers with a nomination at the Critics Choice Documentary Awards and getting shortlisted at the Oscars. Do you have any words of advice for other emerging filmmakers looking to break into the awards circuit for the first time?

SK: Oh man, I wish I knew what that secret sauce was! We were nominated for the Critics Choice Documentary Award completely randomly. We didn’t even know the nominations were happening and hadn’t had any conversations with Netflix at that point about an awards campaign, so when it happened, we were all completely shocked. I think even Netflix was shocked as well.

The Oscars campaign was a little different. My producer partner and I decided to try and run a small awards campaign for the Oscars as the little-engine-that-could. We didn’t have any backing or support from any other parties at that point, but we found the wonderful publicist Adam Kersh, who decided to help us out simply because he believed in the film. We also had some wonderful fairy godparents who were acclaimed filmmakers and Academy members (Daniel Junge, Chiemi Karasawa, Jean Tsien and CAAM, to name a few), and they reached out to fellow voters on our behalf just because they had so much heart for our film. It’s truly because of the generosity of those individuals that I believe we were able to make the shortlist.

So my only real advice to anyone starting a similar campaign would be to try and find your people within the doc community, the people that understand why you made your film and can help support you in that journey. For me, the joy of finding that community and those friends was more valuable than any actual award.

IDA: I’ve read that you were inspired to film The Speed Cubers because your son is actively involved in the speedcubing community. As a director, how important was it to you that you were able to connect with the subjects because of your personal experience?

SK: That’s a great question. I don’t think I necessarily have to have a personal lived experience with the subject matter in order to have passion for the project, but I definitely think I have to have an emotional connection to the material in some way. But that can come with simply identifying with the central human themes running through the film. I might be drawn to a project because I connect to a character as a fellow parent, or I connect with the feeling of struggling that someone else is undergoing or maybe I have a shared understanding of what it means to be a member of a certain community. I think having that emotional connection, though, is crucial for me to sustain passion for the project through the years and the inevitable obstacles that come with making a film. All of the projects I’m currently in development have that sense of vibration for me, that thing that tells you that, deep within yourself, you know how to tell this story because you can feel it in your bones.

SK: I have a few projects in development right now, most of which came to me from other sources. But my next personal passion project is about the sea women (“haenyeo” in Korean) of Jeju Island, which is a community of elderly female free divers who hunt for seafood for a living on a semi-matriarchal island off the coast of South Korea. I met them when I was just eight years old and visiting Korea for the first time, and I’ve been haunted and inspired by them ever since. Ninety percent of the haenyeo are over the age of 60, and this current generation is likely to be the last of the sea women because they’ve been unable to recruit the younger generation of women to carry on the tradition. It feels incredibly vital to me to memorialize these Korean grandmas as the badass heroes they are before they fade into history.