My First Getting Real Documentary Conference: Heroes and Humans 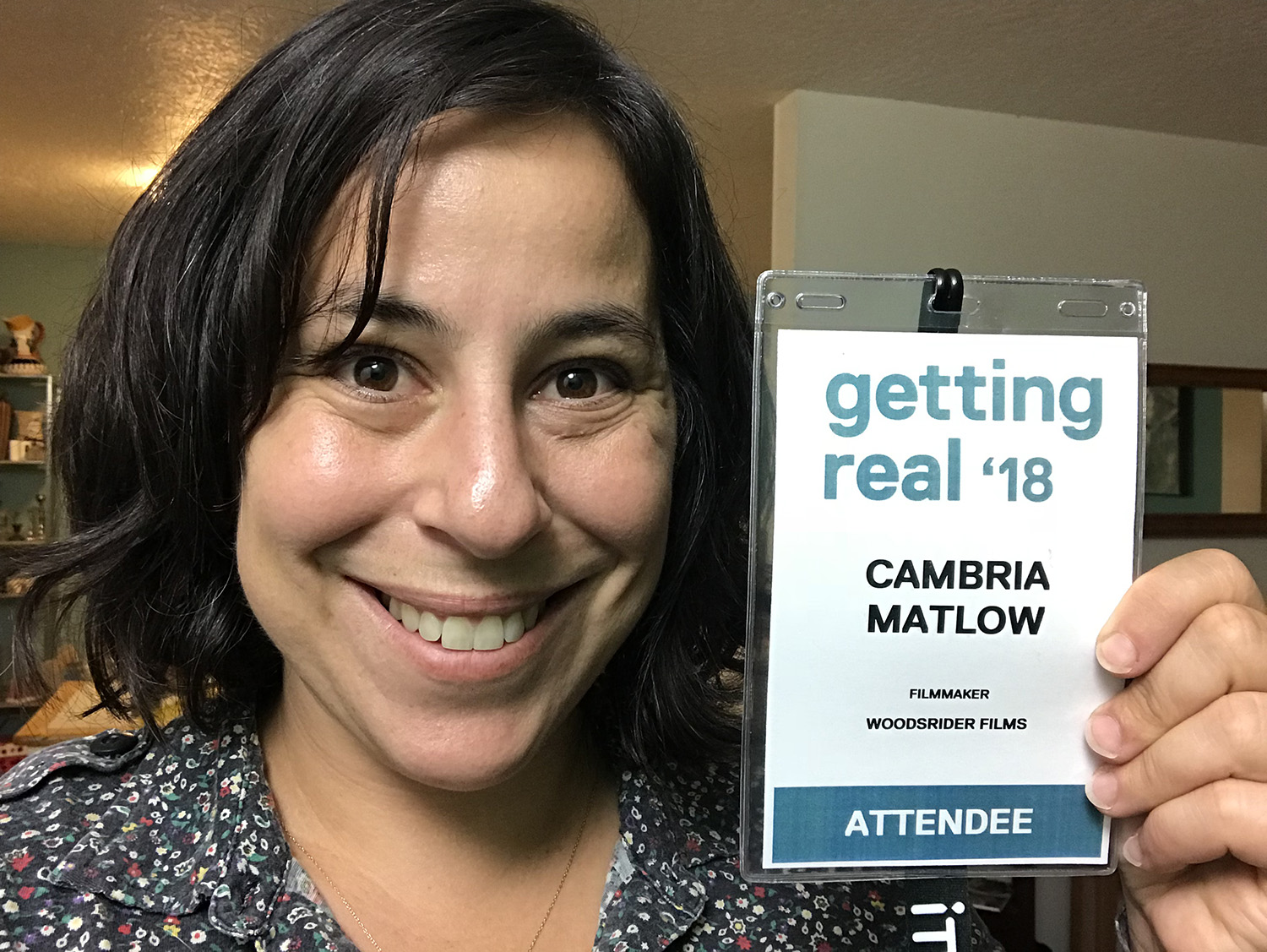 As a documentary filmmaker with one project in distribution, one in post and one in development, it felt like a perfect moment to attend IDA’s Getting Real 2018. Having more than one project to lean on, I was able to seek out industry wisdom from a variety of angles thanks to a professional development grant from the Regional Arts and Culture Council in Portland, OR, where I’ve lived since 2010.

I’ve been to film festivals before and admit that I enjoy looking at massive schedules, circling too many films, and trying to get to them all. What I always forget is that ideally one does this while simultaneously meeting and connecting with dozens of new people, partying with them at night, and getting very little sleep. Whether because this was a conference, and not a film festival, or because I didn’t have to shoulder the stress of showing a film, or because I’m just older and a parent now and can’t do the no-sleep thing, I did no major carousing at Getting Real. However, I did attend what felt like the right number of events.

Because I had been on an Internet-free residency during the pre-registration period, I was concerned that I wouldn’t get into any sessions. Conference Producer Cassidy Dimon told me that there would be standby lines for all and not to worry. She was right! I was pre-registered for very little, but I got into everything I wanted except for one event and one party.

I had to pinch myself a couple of times, thinking, “I can’t believe everyone here cares about docs like I do--that’s so cool!” Self-evident and naive of me, for sure, but worth noting that for many of us, the simple fact of gathering in a group of like-minded folks can feel incredibly validating. There were panels for filmmakers at every career stage--22-year-olds fresh out of film school, commercial producers making first-time features, emerging talents, mid-career pros, seasoned veterans and downright demigods in the field.

I attended with a small crew of Oregon filmmakers representing Oregon Doc Camp and this made a big difference in having “my people” to talk to when the swarm of networking strangers became too overwhelming. As someone interested in developing our regional doc community in the Pacific Northwest and also actively connecting this community with resources and talent on the coasts and abroad, I appreciated the “Regional Sustainability Models” session, although I didn’t have time to actually attend.

Industry programmers, funders and broadcasters were also very much on the scene. I should have set up more meetings in advance with these folks, but it was easy enough to find them, as most on the industry side were participating in panels and available for chats afterwards. Daily lunches from the onsite food trucks was a nice touch, providing another opportunity for networking. The conference venues around Hollywood were surprisingly walkable; I’d never walked in Los Angeles so much in my life.

My first event was a roundtable talk with Megan Goldstein from Catapult Film Fund.  Immediately eight people were giving elevator pitches and it was go-time. What stuck with me from this session was the bravery of each filmmaker, and Megan’s advice: put together a solid team before submitting, and be able to explain from the outset a visual language for your film. My next roundtable was with Hussain Currimbhoy, a documentary programmer at Sundance Film Festival. While I went in rather intimidated, Hussain broke the ice by making it clear that he simply loved film. He didn’t ask us to pitch, but he gave a few broader tips about submission do’s and don’ts. After the roundtable we discussed my project in development, my unique position as someone returning home to Los Angeles, and the “landscape-and-trauma” genre that, upon Hussain’s naming it, gave me some clarity and confidence around my upcoming project.

Next up, a symposium called #DecolonizeDocs was divided into three panels—The Industry, The Filmmaker and The Audience. I caught the Industry slot, led by Brown Girls Doc Mafia Founder Iyabo Boyd. Among many vital takeaways, a big one for me was Iyabo’s encouragement to coordinate conversation about white privilege with other caucasian filmmakers, in an attempt to relieve people of color from the emotional labor of initiating change around equity, diversity and inclusion in our industry. True/False programmer Abby Sun basically brought the house down with enactable solutions to decolonizing the programming process. I can’t wait to see what someone with her vision will bring to an already-phenomenal festival.

Robert Greene’s panel, “Reenactment Reconsidered: Staged Realities and Nonfiction Fantasies” with Yance Ford, Sandi Tan and Kitty Green, was utterly enthralling. I couldn’t stop jotting down nuggets of wisdom from these filmmakers, and had more head-nodding moments in recognition of like-minded truth-telling, and “a-ha” moments in recognition of genius, than I could count.

I enjoyed the intimate and laid-back approach of Kartemquin Films’ Tim Horsburgh in breaking down Bing Liu’s Minding the Gap in a “Here’s What Really Happened” session. Along with producer Diane Quon, Bing and Tim guided the filmmaker-only audience from the film’s inception, through the rollercoaster period of production and funding, and ultimately to distribution, with a million little insights dropped along the way. As a snowboarder who made an arty boardsports doc myself, I was especially stoked to talk afterwards with Bing. I felt happy for his success in humanizing a board culture that often feels flattened and one-dimensional in its portrayal of youth.

And then Jenni Olson made me cry. I encountered her essay film The Royal Road several years back and its impact on me continues to this day. I even dedicated my new short film to her.  I made it all the way through the riveting, heart-melting panel she led called “Creative Courage in Nonfiction Storytelling,” alongside Yance Ford (again coming with volumes of wisdom and sheer force of presence) and the spritely Jennie Livingston. I approached Jenni after the panel to let her know how much her work had changed my life, and unexpectedly the tears started flowing.  She gave me the warmest hug, and took my emotion as a huge compliment. I have never cried at meeting a hero before, but Getting Real got really real for me in that moment.

Post-Getting Real, I leapt straight into a shoot for my new film and then back home to a brand new teaching job. I left the conference inspired, and feeling more willing to go through the process that is right for each new film. Patience in playing the long game seems key. I still need to go through my business cards and notes, and follow up with certain folks. I still need to find a producer for my new film. I can’t wait to watch Sandi Tan’s Shirkers tonight on Netflix, and continue to find inspiration in my fellow makers. I wish every local region had a conference as well attended and well curated as this one, but until then, I’m grateful to have Getting Real just a two-hour plane ride away.

Cambria Matlow is an Oregon-based director, writer and editor.  Her award-winning feature films include WOODSRIDER, an immersive, cinematic portrait of a female snowboarder, and BURNING IN THE SUN, a participant in IFP’s Documentary Lab and Independent Film Week.  She is a media educator and associate leader of Portland’s Film Fatales.  Her new short is called NO MORE DOPE PARTIES.

END_OF_DOCUMENT_TOKEN_TO_BE_REPLACED

Where Shakespeare Meets Scheherazade: Towards a North-South Camaraderie in Documentary