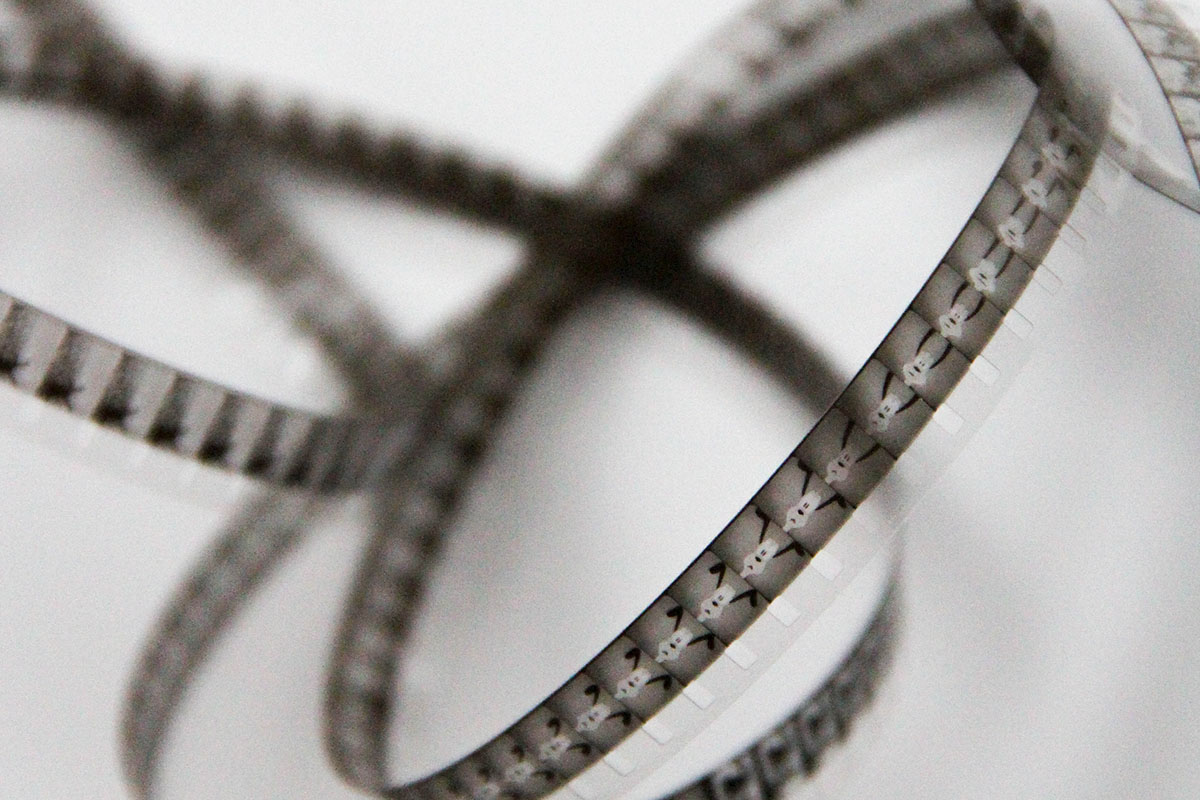 "'Tis the business of little minds to shrink," declared Tom Paine, extolling moral courage at the crux of the American revolt. If Paine were alive today and forced by the demise of pamphleteering to write columns on technology, he might instead declare: "'Tis big business for clever minds to shrink."

Witness the Walkman, audio CD, 8mm video, Betacam, 3.5" micro floppy disk—each a runaway success, stamped with the hallmarks of miniaturization, new markets and flowing profits. So what possessed Sony to buck its own trend, to prop-up creaky old 3/ 4" U/matic, with its bulky cassette (too big for a camcorder) and 60-minute maximum play? Why would Sony develop and promote an SP "superior performance" version of 3/4" in the shadow of Betacam?

In other words, what explains the persistence of 3/4"?

The 3/4" U/matic format was co­ developed by Sony, JVC, and Panasonic as a consumer product. The first 3/4" VCR in 1971 featured an easy-to-use cassette, simplified controls, and a built -in TV tuner. But consumers balked. The idea of a home videotaping machine was then too radical, the $1000-plus price tag too high.

Professionals, however, pounced. It's hard to recall that in the early 70's, 1-inch Type-C, Betamax and VHS weren't even specks on the horizon. Videotaping meant 2-inch quadruplex, a reel-to-reel broadcast format characterized by machines the size of a deep freezer, budget-busting tape stock costs, and an editing process limited to studio installations. 3/4" took tape­ handling out of the hands of broadcast professionals and union operators and opened the floodgates to casual viewing, off-line editing, ENG field recording, affordable archiving—and truly independent production.

Corporate, industrial, and educational markets followed, underwriting a substantial investment in 3/4" equipment: 500,000 U/matic 3/4" VCRs in North America and an equal count across South America and Europe. So despite newer and arguably superior formats like S-VHS and H18 (Sony's high-band 8mm), 3/4" machines will continue in use for decades to come. Present equipment will be amortized before new investments are made. And few are champing at the bit to dub 20 years of 3/ 4" recording to some newer format, especially when the "jury is out" regarding which of the challengers will survive.

While JVC also manufactures 3/4" decks (NEC and Panasonic have quit), only Sony continues to develop the format. Its present strategy—to secure a niche for 3/4" for as long as possible—is two-fold: 1) improve its recording characteristics, and 2) position it as an editing format—not an origination or distribution format—by building on its multi-generational superiority to S-VHS and H18.

Towards the first goal, Sony unveiled the SP version of 3/4" U/matic in 1986. The fundamental improvement over conventional 3/4" was a 30 percent increase in horizontal detail obtained by an upward shift in recorded luminance frequencies (a technique that had previously transformed Beta into Super-Beta). Since the chrominance frequencies in the signal's color sidebands were not moved, a second benefit was greater separation between luminance and chrominance signals, reducing troublesome interference between the two.

Unlike the SP version of Betacam, 3/4" SP did not trade up from normal oxide to metal particle tape. (The shared SP designation is confusing; their improvements, dissimilar.) While metal tape is superior to oxide, it can't be played back with heads not designed for this purpose. Sony elected to engineer total compatibility between conventional 3/4" and 3/4" SP. Visible improvements were achieved instead with oxide tape, albeit a high energy formulation that also enhanced audio. As a result, 3/4" and 3/4" SP cassettes will play in either version of the VCR; however, SP advantages are abandoned when an SP cassette is played in a standard VCR.

Full upward-downward compatibility encourages present owners to supplement, rather than replace, standard 3/4" with SP as the need arises. In a time of technological uncertainty, when the dark side of innovation, obsolescence, lurks in the shadows of every purchasing decision, Sony's gesture borders on benevolence.

What 3/4" U/matic was to 2" reel-to-reel quad 18 years ago, 8mm is to 3/4" today—a miniaturized miracle. Although consumer 8mm has been on the market for several years, it is still a challenge to avoid a sensation of awe while viewing a H 18 playback or cradling its Lilliputian cassette in the palm. To achieve 400 lines of horizontal resolution—identical to 1" Type-C and S-VHS—H18 exploits high-energy metal particle tape (and is primed for higher performance metal evaporated tape when it becomes available), a unique, sophisticated closed-loop sensing technique that guarantees precise tracking, Automatic Track Finding (ATF), and an upward shift of luminance frequencies akin to 3/4" SP.

In the spring of '89 at NAB, Sony's professional division debuted three H18 products, each a clue to Sony's intentions towards the tiny format, at least in the industrial and educational markets. The least surprising was a professional H18 camcorder, the EVO 9100 Portacam. It costs $5200, weighs 4.9 lbs. and delivers its 400 lines of detail at a signal/noise ratio of 45 db (almost matching the first ENG camera, the 1979 Thompson 602 Micro­ cam ). Next came a dockable recorder, the EW-9000, that can be attached to other cameras. But most tellingly, Sony unveiled a H18 studio record/playback deck that featured a component video "DUB" connector used only by 3/4" U/matic decks. Why?

Consider: 3/4" SP represents 18 years of experience. It is a mature format. Time-code is no stranger. As a result there are 3/4" SP decks with plug-in time base correctors and field/frame stores, with dynamic tracking for broadcastable slow-motion effects, with confidence playback for instantaneous monitoring while recording. The cassettes and tape are robust, the video tracks are wider than those of 1/2" or 8mm and more resistant to dropouts and oxide abrasions, and tape width alone enables use of unrecorded areas called "guard bands" to separate and prevent signal bleed from adjacent tracks.

ED Beta, S-VHS, and H18 don't have tape "real estate" for guard bands. Their tracks are much closer and can't be spaced apart. Instead, a clever gimmick called "azimuth recording" impedes interference between adjacently recorded signals—but only for luminance. To minimize chrominance interference, a further technique is required: digital sampling and comparing of adjacent scan lines to spot and fix likely color errors. However, a scan line can't be compared until another arrives. The result on screen is a delay in color by one line—a slight but noticeable vertical color shift. Without benefit of special digital processing found in top professional equipment, this color shift accumulates with each generation—not a pretty sight.

What good is 400, even 500 lines of luminance detail if the color smears after a few generations? In this respect, 3/4" SP is clearly superior to Hl8, S­ VHS, and ED Beta (although not in the same league as component Betacam and M-11, which maintain total separation of luminance and chrominance. In terms of picture quality, 3/4" SP is the low-cost multi-generational editing format that H18 is not.

The same holds true for audio. Although H18, like Betacam SP, can record remarkable high-fidelity FM audio as part of its video signal, this audio can't be re-recorded on the original tape without re-recording the video signal. They're inseparable; as such, FM-as-FM is not editable. For the recording and re- recording necessary to sound editing, old-fashioned longitudinal edge tracks are required.

The stereo longitudinal tracks of 3/4" are recorded and read at 3.75 inches/second by a stationary head (as in a Walkman or Nagra). H18 has one such longitudinal track; at.57 ips, it scarcely survives multiple dubbing. (S­VHS is worse -.50 ips.) H18 does offer the possibility of re-recordable stereo PCM digital audio tracks—but in postproduction only. (Perhaps they add too much to camcorder complexity and cost?) To edit and mix digital audio requires digital signal processing equipment that is costly and not in wide use. On the other hand, the stereo longitudinal tracks of 3/4" SP boast Dolby C noise reduction and can be processed through any audio mixing board.

In promoting 3/4" SP Sony is not so bucking its own success at miniaturization as integrating this trend into the practical world. H18 appears to be an excellent choice for business, industrial, educational, documentary, and ENG "acquisition." Also distribution: a 1.5 ounce H18 cassette costs 45 cents to mail first class. 3/4" SP on the other hand seems an apt and affordable choice for low-cost post-production. In our disposable age, there's something appealing about recycling this oldest of consumer formats on behalf of the newest.

David Leitner is a film/video producer/director and DP. He is the former Director of New Technology at Du Art Film/Video Labs in New York City. He recently shot, produced and directed with Susan Korda a 16mm documentary about the 50th anniversary of Austria's Anschluss to Nazi Germany, Vienna Is Different, which premiered at the 1989 Berlin Film Festival; he is Co-Producer/Technical Director of For All Mankind.

END_OF_DOCUMENT_TOKEN_TO_BE_REPLACED

Shooting from the Hip: An Interview with Cinematographer Maryse Alberti

Inside Out: Nadia Hallgren