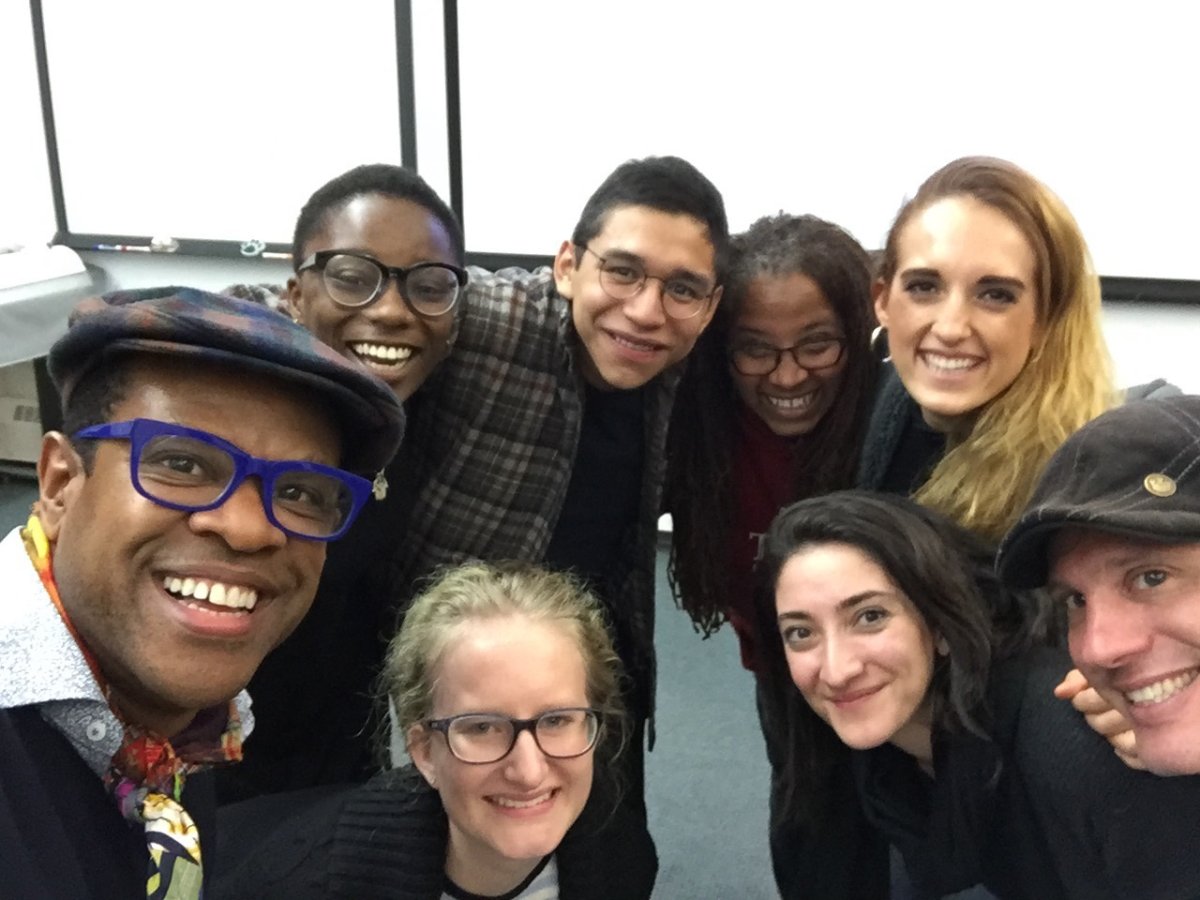 Harris has been teaching at Yale University for the past five years, and thanks to a major grant from the Ford Foundation, he has recently launched the Institute for Inclusive Storytelling under the auspices of the school’s Department of African American Studies and the Yale Center for Collaborative Arts and Media (CCAM).

Using his own work as a jumping-off point, Harris is helping students at the Institute to investigate their personal histories and develop their own storytelling modalities. In recognition of his excellence as a teacher, Harris was recently honored by Yale with the Poorvu Family Fund for Academic Innovation Award, which will support the evolution of his work at the school and assist his students in understanding the 30 years of scholarship that went into developing his work.

In an interview with Documentary, Harris says that he created the two interactive programs after connecting with the African American tradition of honoring one’s full familial history through photo albums. While studying the unvarnished mix of mundane and extraordinary images in each album, Harris detected a palpable feeling of affirmation that debunked stereotypes and preserved the beauty of who these Black families were to each other.

As an example, Harris recalls meeting a former football player at one of his screenings who proudly showed off a family photo album that he’d inherited from his great, great grandmother. Of all the photos, Harris says that the football player was especially eager to show off pictures of his great granduncle wearing dresses in North Carolina during the 1920s. Harris says that he always carries his queer identity with him into any space that he enters and felt that this was a loving gesture of connection on the part of the football player―a way of saying that though he might not be queer himself, within his own family, he has known and loved queer people.

To Harris, such gestures “have to do with ancestor worship and paying homage to those who came before.” As part of his process, when similar moments of transmission and connection occur, Harris completes the circuit by training participants to create their own “sacred space” of community storytelling that goes beyond the “nuclear family” to connect with the entire world.

As Harris’ life and producing partner, Don Perry, discusses during the interview, the program is “the most subversive project in public media today” because it “completely changes what we think about culture in America” by combining oral tradition with visual tradition to reveal “our agency and the fullness of our lives.” To illustrate his point, Perry cites the tradition of grandparents from different communities, chatting with each other as their grandchildren play in a park.

Though they are strangers, eventually the grandparents will begin to share photos of their families with one another and become fast friends, if only for a moment, by bonding over what Perry calls “the things they have in common.” Perry and Harris note that new media practices―such as curated Instagram feeds, which encourage perfectly edited highlights―and the ongoing pandemic have erased that possibility of unity and cross-cultural exchange.

Much of Harris’ artistic and pedagogical process springs out of returning his students to this tradition of investigating one’s familial history and developing rapport with the world at large by interrogating and bonding over shared beliefs. He says that this focus on community storytelling and documentary filmmaking in particular springs from his lifelong desire to harmonize different narratives.

This practice was the guiding spirit of his first documentary, VINTAGE—Families of Value, which he conceived, wrote, directed, filmed, edited and produced. VINTAGE looked at three Black sibling groups that contained at least two queer siblings. Harris gave video cameras to each cohort of siblings and asked them to interview one another over the course of five years, starting in 1989.

Harris included his own family in the cohort as a personal research methodology because his brother―who is also gay and an artist―had recently tested positive for HIV, and in the process of talking to each other, he became interested in learning how the camera could facilitate communication between siblings, beyond simple words.

Documentary spoke to Harris via Zoom about his pedagogy, archives and filmmaking, and how they relate to the new Institute for Inclusive Storytelling. This interview has been edited for length and clarity.

DOCUMENTARY: Tell me about your classes at Yale.

THOMAS ALLEN HARRIS: One is a theoretical course within African American Studies called Family Narratives, Cultural Shifts. It looks at films, artwork, and methodologies employed by artists and filmmakers who use their family archives to illuminate stories connected to larger social and post-colonial movements in different parts of the country.

hat includes activist movements in regards to Black Lives Matter, feminist movements, LGBTQ movements, and anti-poverty movements. We look at personal journeys and navigate public as well as private archives to give another dimension to the story and locate a certain type of investment that is transparent.

D: The word “transparent” stands out to me. It is so important that we connect with the influences that shape a specific narrative. I’m curious: Is it difficult to empower your students to tell their own stories in the way that an “expert” like Tom Brokaw might? Or do they feel that by being at an elite institution, they automatically have the right to tell any story?

TAH: That's something we’re always talking about: our responsibility as storytellers and people who have access to the power of the media. That’s in the second part of the course: a production course offered primarily through Film and Media Studies called Archive Aesthetics and Community Storytelling.

It asks, “What is our responsibility both to the archive and to people who we're putting on camera? How do we navigate issues around truth and power?” All of those things are so important because we're constantly making decisions based on them. Our discussions open things up and allow us to bypass inherent notions of top-down power dynamics. And I think it's very interesting for the students to think about these issues in the works of other people―such as Tom Brokaw, who is backed by extremely well-financed entities and a big audience―and in terms of navigating through the stories of their communities.

D: Has it been difficult to fold your own agenda of empowering people to connect with other communities into the mission of Yale’s African American Studies department and CCAM?

TAH: Not at all. Collaboration is essential to my vision, whether that is making work or having dialogue. And I’ve had a lot of public conversations in the context of the university and beyond, with faculty members of all backgrounds, and I feel blessed to be in this community.

The African American Studies department at Yale is the oldest one of its kind in the United States. And it's really robust and focused on elevating voices that have been suppressed. And CCAM has new media people doing documentaries in ways that are radically different from the single channel modality of television. And we're also in development on a project connected to science, called My Mom, the Scientist.

D: I recall you saying that your mother was a scientist and actually inspired you to study science at Harvard.

D: Tell me about the Institute for Inclusive Storytelling.

TAH: I received my first major Ford Foundation Grant for É Minha Cara (That's My Face), which is connected to our institute because they've just given us a major catalytic grant to start this Family Pictures Institute for Inclusive Storytelling, which is building off of the kind of research that I've been doing and making it much more available to study and replicate and think about how the methodology can be used within other types of research, including neuroscience or other kinds of disciplines.

D: Is it fair to say that you are trying to connect people back to the way that we used to relate with each other, before technology and online curation made it easy to disconnect?

TAH: It absolutely is. My partner calls it “subtly subversive” because it changes people and breaks down that hegemonic narrative that is based in fear and survival. For me, this is about bringing the heart back into the story because that emotional truth is very distinct from intellectual reasoning. It's looking at, "How do you synthesize those two spaces?" It also talks about notions of spirit. At its core, I think that's what makes these projects so forceful and powerful.

END_OF_DOCUMENT_TOKEN_TO_BE_REPLACED

'Through a Lens Darkly': Thomas Allen Harris on Photography and Black Identity