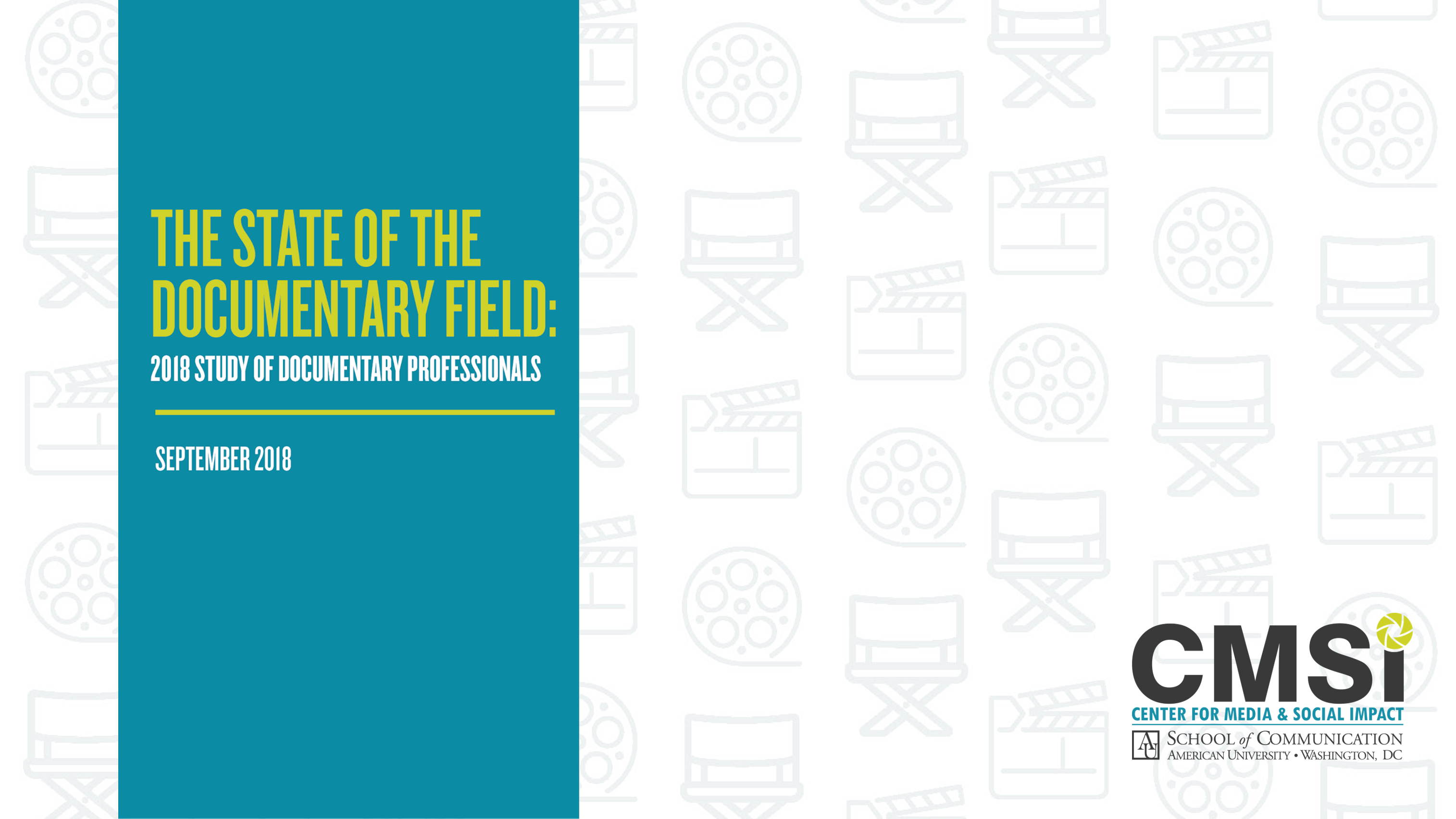 The State of the Documentary Field initiative was shaped by the Center for Media & Social Impact, in collaboration with Simon Kilmurry, executive director of the International Documentary Association, with review also provided by Patricia Aufderheide, CMSI founder. CMSI affiliate researcher Bill Harder consulted on survey programming and also served as an additional data analyst. CMSI communications and program manager Varsha Ramani served as communication director and publication editor. Olivia Klaus, documentary filmmaker and graphic designer, created the report design. The State of the Documentary Field initiative is supported by an award from the National Endowment for the Arts' Media Arts program.

The Documentary Field in 2018: Opportunity & Challenge

The evolving digital era presents new opportunities for documentary makers and audiences as platforms shift, new storytellers emerge and media systems transform. Documentary has long enjoyed a vibrant space in the media ecology, and the marketplace for creative nonfiction storytelling continues to expand. Although the digital age began in the latter part of the 20th century, its practical implications have manifested for documentary storytellers and fans within the last 10-15 years--the era of YouTube, social media, streaming networks and accessible filmmaking equipment. Audiences are finding nonfiction stories in new ways, organizations have emerged at the intersection of documentary and public engagement, and a global community of documentary makers continues to grow. Despite an expansive landscape for documentary filmmakers and audiences, particular challenges are persistent. Questions about sustainable systems and sources of revenue that can support career-making documentary work are perennial. Issues of racial, ethnic and gender diversity require attention and scrutiny. As viewers continue to discover documentary storytelling across various platforms, and as new filmmakers enter the craft, tracking industry professionals’ perspectives and lived experiences is a vital pursuit.

In 2016, in collaboration with the International Documentary Association, the Center for Media & Social Impact identified a need to understand documentary trends, as well as the motivations, concerns and perspectives of documentary industry professionals and makers at a moment of transition and opportunity. Sparked by this need and curiosity, we launched a pilot phase of this research in 2016, which was released at the 2016 IDA Getting Real convening. Two years later, this 2018 report reveals the first formal foray into this work. The State of the Documentary Field study will be repeated every other year.

The CMSI State of the Documentary Field study is the first research to reveal trends and experiences of contemporary documentary professionals primarily based in the United States.1 Crafted by CMSI with feedback from the International Documentary Association (IDA), the study was informed by insights and questions derived from documentary professionals. The survey included 33 content questions and standard demographic questions (age, race, ethnicity, sexual orientation, education, and country of residence, along with membership in documentary-related organizations). The study was designed to understand documentary industry members’ perspectives and lived experiences based on four key themes:

CMSI collected survey responses between January and June 2018. Respondents' participation was voluntary, and personally identifiable information was not collected. No financial incentives were offered or given. American University's Institutional Review Board (IRB) reviewed and approved the research protocol, and the survey was hosted online on American University's Qualtrics platform.

To assure robust participation from documentary film professionals, the International Documentary Association, which includes more than 2,100 members, promoted the survey on its website and social media channels. CMSI promoted the survey through its semi-monthly e-newsletter. Additionally, CMSI and IDA asked additional documentary groups and communities to participate in outreach; these groups notified their members and encouraged participation in the survey through email lists and social media promotion. The full list of participating outreach organizations includes:

Demographics of the Respondents

These survey findings are based the perspectives of approximately 550 documentary industry professionals.2

The survey was designed in two parts:

Based on a filter question that asked respondents to indicate their "primary position" in documentary, Part One offered opportunities for all self-described members of the documentary profession to respond; this group of respondents included those who identified their primary role as directors, producers, editors, directors of photography, as well as nonprofit professionals, impact producers or strategists, film-festival professionals, broadcasters, professors and funders.

Part Two included questions customized for self-described directors and/or producers (that is, those who indicated that either "director" or "producer" was their primary role), given their creative, business, and financial decision-making roles in documentary work. In this way, we were able to ascertain film economics information and other insights from decision-making documentary filmmakers. About 335 directors and producers answered these "primary makers" questions.

We analyzed the data to examine meaningful (statistically significant) differences between key demographic categories: race and ethnicity, gender and filmmaker "generations" (number of years in the documentary field).3 In terms of documentary filmmaker "generations," based on respondents' answers to a particular survey question ("How many years have you been in the documentary industry?"), we created two aggregate groups: "New Doc Pros" (those who joined the industry over the last 15 years), and "Original Doc Pros" (those who have been in the industry for more than 15 years).

Where those differences exist, they are included here; if no differences were found between those demographic categories, they are not reported here.

2 Because respondents were permitted to skip some questions, the exact number of people who answered varies from question to question, but not in a way that is numerically meaningful. In total, 679 people completed at least part of the survey, and about 550 people answered the majority of the questions; thus, the reporting and analysis here are based on the sample of 550.

Caty Borum Chattoo, director of the Center for Media & Social Impact, an innovation lab and research center based at American University's School of Communication in Washington, DC, is a professor, writer, documentary filmmaker and scholar. She serves on the boards of directors of Kartemquin Films and Working Films. Her book about documentary and social change is forthcoming from Oxford University Press.

END_OF_DOCUMENT_TOKEN_TO_BE_REPLACED

Creating a Path for Sustainability in the Documentary World

The Road to Sustainability: Midwest Summit Participants Continue Journey to a Viable Future