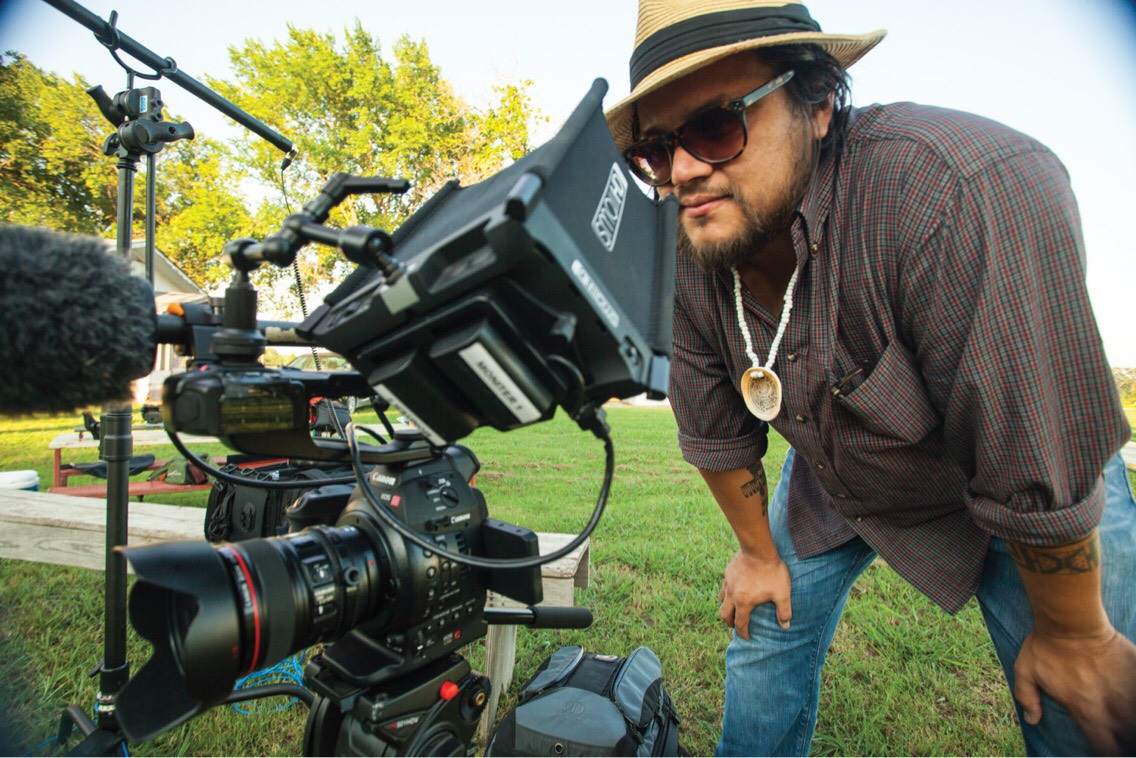 Editor's Note: Lauren Wissot had interviewed Sterlin Harjo for the article she wrote for the Fall 2017 issue, entitled "Whose Story? Five Doc-Makers on (Avoiding) Extractive Filmmaking," but she and I both felt that this interview would work better as a stand-alone complement to that article.

That quote is a tweet from veteran indie filmmaker (and one of the founders of Native comedy troupe The 1491s) Sterlin Harjo, a member of the Seminole Tribe with Muskogee heritage, who has been asked a lot of Indian questions lately. He's been asked to produce three or four docs on Standing Rock, and to suggest Native casts for two current TV shows, but not once to write or direct—even though his résumé from the past decade includes three narrative features and one doc, all of which were acclaimed Sundance premieres. So it's with heartfelt gratitude—and a bit of trepidation—that I reached out to him to ask just a few more.

What's the most important piece(s) of advice you'd give to an outsider coming into your community to cover a story?

Sterlin Harjo: The biggest problem I see is when non-Native people come into Native communities with this idea that they are the first ones to ever look at this community with a camera—as if they have "uncovered" or "discovered" something. I mean, that mentality was there from the moment Columbus stepped foot on the Santa Maria. This arrogance of, "Whatever you have, we want to capture it, then show it to our people back home." Since the beginning of cinema, people have been pointing cameras at our people and our culture, and from the beginning they have been fucking it up. So, there is a natural, healthy degree of skepticism towards film crews from the outside.

My advice: If that natural, healthy degree of skepticism isn't there, you should be figuring out what the problem is. Consider talking to a different person. I see film crews, all the time, grabbing the first loud, "chief-y" Indian that they can (usually men) and letting them speak for a huge, diverse, community at large. My biggest advice is to never interview the people that are trying to get in front of the camera. I've seen bits and pieces of Standing Rock documentaries made by non-Natives that suffer from this—people sticking their mug in the camera, playing up their "Native mysticism," and placing themselves in leadership roles. Those are the people that make us look bad.

It's equivalent to a non-Native that lives in the South seeing the toothless, shirtless hillbillies constantly being interviewed on the nightly news. Everyone's thinking, "They're gonna think we're all like that.” And that's usually the type of person outsiders are champing at the bit to interview. Humility is built into our cultures—so the people you really want to talk to are the ones not trying to be on TV. Those are the ones that will have the most knowledge, and be most comfortable with their Native identity. But those are also the ones that will take investment to bring out. You have to gain their trust. But if you do this, it will make your film that much better. The way indigenous people live and carry themselves is very different from non-indigenous worlds. You need to learn those rhythms, and you have to learn when something isn't appropriate—something as simple as asking a question. Or talking.

So can you think of a specific "red line"—a situation in which an outsider had absolutely no business telling a particular story, regardless of approach?

Filming ceremonies is always a no-no. I hear people tell me all the time, "But they gave me permission." A medicine person in our communities would never try to be on camera and have you film what they do—and if they are, then something is very wrong.

But is there a situation in which an outsider's perspective might actually shed greater light on a community’s story?

Of course. We don't own every story in our community. We own our stories, but if a non-Native person comes in and gains the people's trust, and spends time with them, then sure, by all means, do your little movie. But, here's the line: Are you making a film that makes outsiders learn things they didn't know about the community you’re filming? Are you shedding light on a community to people on the outside? If so, stop. Instead, shed light on an aspect of the community that the community themselves can learn from. After that, people outside can get their fill. But a documentarian's attention should be on the subject, not the audience. That's with any film, as specificity will in turn make the story more universal.

One of my favorite films is Jim Jarmusch's Dead Man. Sure, it's made by a white guy, but that white guy took the time to get the details correct in all aspects of Native lives. Clothes, language and culture are all accurate. And sure, they are changed here and there to fit the story, but you feel that the auteur did his homework. You feel it in the storytelling. When you walk into a community from the outside and put your camera in the first person's face that comes along without really knowing that community, then you are doing a disservice to the community, the audience and to storytelling in general.

END_OF_DOCUMENT_TOKEN_TO_BE_REPLACED

Microaggression in the Documentary Business: Who Do You See at the Table?

Toppling Structures of Inequality in the Documentary Field

Canons Must Fall: Mapping Transitions within the Documentary Space