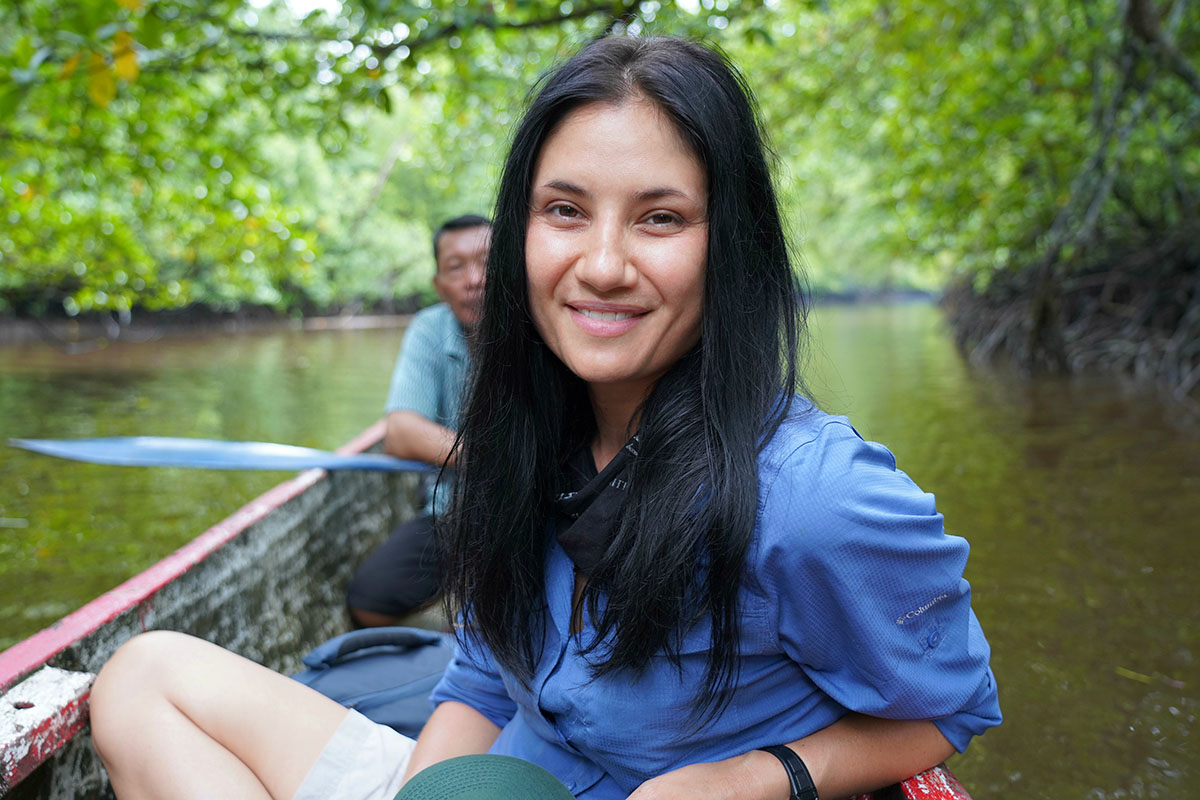 Allison Carden Hanes is a primatologist and an environmental filmmaker. Her work focuses on human-wildlife conflict, community-based conservation, ecotourism, deforestation, and Indigenous rights. Her Masters study of disease transmission between mountain gorillas and tourists in Uganda at Oxford Brookes University inspired her journey into filmmaking and Gorilla Trekking Film (Uganda). She also has a decade of experience in the nonprofit world and runs a women-led production company, One Health Productions. Hanes’ mixed European and Filipino heritage lends her a unique sense of empathy with which she approaches the stories she tells.

IDA: What was the inspiration behind your upcoming film, Gorilla Trekking Film (Uganda)? What compelled you to share this story with the world?

ALLISON CARDEN HANES: Gorilla Trekking Film (Uganda) came about pragmatically while I was conducting research in Bwindi, Uganda, in 2011. I was doing semi-structured interviews in Bwindi Impenetrable National Park, Uganda, accessing disease-transmission risks between mountain gorillas and tourists. At the Uganda Wildlife Authority (UWA) headquarters in Bwindi, I would have daily interactions with tourists coming to visit the mountain gorillas. Many showed up with very little time to be prepped for their trek, and they weren’t able to watch the existing best-practices video before embarking on their gorilla trek. The video at the time was very long and even breached some gorilla-trekking guidelines. I, as well as tourists, immediately saw a need for a new film, and UWA agreed that it was long overdue. A few years later, with more interest in the power of media and film, I assembled a team, but our funding fell through. When the COVID-19 pandemic hit, we were terrified about the impact on the gorillas after colleagues had proven that non-human primates could contract the virus. At that point I decided I was going to make the film with or without financial support, and in early 2021 we started pre-production. We just finalized the two short versions this week; you can find them on our website. The films aim to protect both gorillas and humans from more diseases, specifically respiratory viruses like COVID-19. We hope to make two more country-specific films in Rwanda and the Democratic Republic of the Congo.

IDA: How did primatology evolve into filmmaking?

ACH: With over a decade in biodiversity-focused nonprofits, I always valued media and film, but was constantly pushed into development. I wanted to interact with more filmmakers, photographers and journalists. So in 2016, I quit my job and produced a wildlife film in Central Africa. Though I didn’t have much film production experience, I believed the depth of my nonprofit management and biological research skills would translate well into this new field. Now, after a lot of volunteering, seminars, festivals and jumping in on all sorts of different film projects, I’m finally comfortable being called a “filmmaker.” After moving to New York City, I was hired to run a global science film festival out of the Brooklyn Navy Yard, where I was able to use my nonprofit skills while surrounded by filmmakers and scientists. In 2018, I decided to take the leap and focus on my projects and expertise. I am so fortunate and grateful for my New York City filmmaker community.

IDA: With so much of your work revolving around international travel, how did you navigate staying active in your field during the pandemic?

ACH: Since we’re in the midst of a global one-health pandemic, this has actually been one of the busiest times in my career. Due to the nature of this virus, there’s never been a stronger focus on global public health, and one-health conservation practices are finally getting the recognition and understanding they deserve. At the beginning of the pandemic, I was working as a veterinary technician while simultaneously developing multiple film projects, including Gorilla Trekking Film (Uganda). Other than postponing flights to ensure our team was fully vaccinated for the protection of our colleagues and the gorillas, we were working long hours through summer 2021, and actually filmed that entire project/expedition during a strict national lockdown. Our team was sure to take every precaution necessary to ensure we safely traveled and filmed during the pandemic.

IDA: What future projects do you have coming up that you want IDA members to know about?

ACH: My biggest and most ambitious long-term project is my multimedia feature, The Great Call. A project for which I’m honored to have IDA’s support through fiscal sponsorship. We are resuming filming in spring 2022 in Mentawai and Borneo, Indonesia, and are planning further expeditions in China. I don’t anticipate distribution until at least 2024. The project will include a 90-minute feature, XR short and immersive art exhibition. Other immediate projects include getting right back to East Africa for a short film on the effects of COVID-19 on ecotourism, wildlife conservation and local communities, as well as a feature film on my former field supervisor, now close colleague and dear friend, Dr. Gladys Kalema-Zikusoka. We just spent the summer with her and envision many more collaborations in the future.