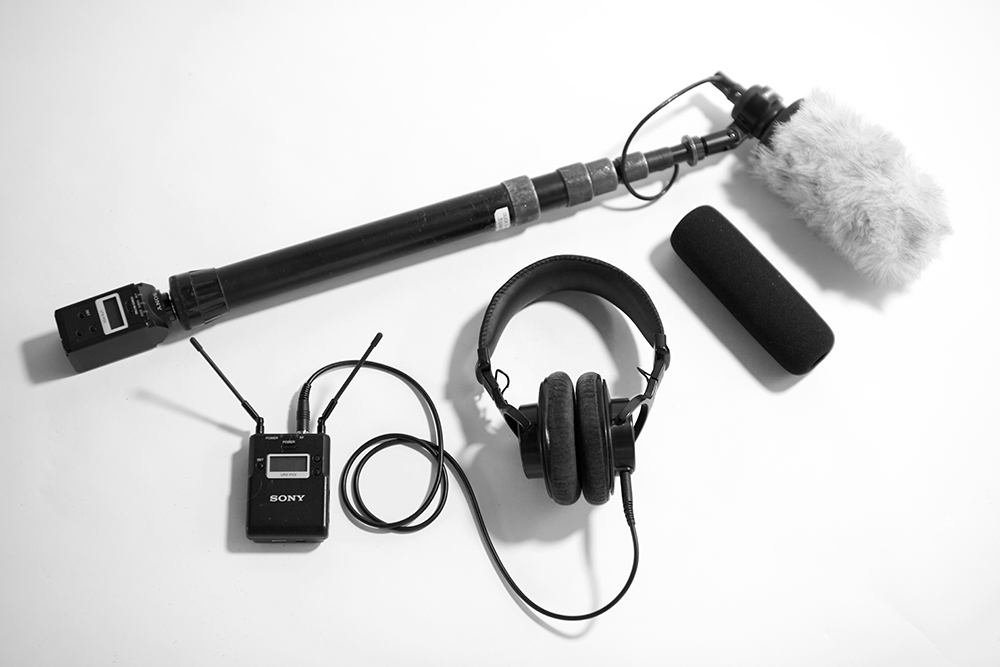 Some of the great recent documentaries—Citizenfour, Cartel Land, The Overnighters, Darwin's Nightmare, My Country, My Country—were shot with little or no sound help. Working alone or as a team of two is sometimes an economic necessity and sometimes the only way to gain access. High-quality in-camera sound, the extended dynamic range of digital sound, near artifact-free auto gains and inexpensive wireless systems make it possible—although maybe not ideal—for one person to do both camera and sound. The kit proposed here is based on what's on the market in Fall 2016. It can be used by a one or two-person crew neither of whom need be sound professionals. There are many possible configurations; this is one that I find interesting at the moment.

The received wisdom is that a camera-mounted microphone should be a "shotgun mic" with a good deal of "reach." Salespeople will reinforce this assumption. Well, a "shotgun" pickup pattern may be the worst choice and microphone "reach" is an erroneous concept. A "shotgun," or supercardioid microphone, has a highly directional pickup pattern or forward facing "lobe" along its axis. It also has a substantial "rear lobe," which is not a medical condition but an unfortunate sensitivity to sounds directly behind the microphone. Both of these qualities become liabilities when a supercardioid is mounted horizontally—the worst orientation for a directional microphone.

There is a common misconception that microphones with greater "reach" can be used at greater distances and still get good sound. This so-called "reach" is really off-axis rejection. In an ideal sound environment, supercardioid and cardioid (wider pickup pattern) microphones will sound pretty much the same at equal distances. The supercardioid has the advantage in poor sound environments of being less sensitive to off-axis sound, but that comes with a price. Supercardioids are best used on a boom pole or hand grip.

If you listen to a shotgun camera-mounted microphone on headphones or earbuds— which, of course, you always do—you will quickly notice two things. First, it has to be pointed directly at the person speaking. If the reactions of the person listening are more compelling visually, too bad. If you were to pan to the listener, the speaker will be so far "off-mic," the sound may be unusable. Your camera angles become dictated by the sound sources. Second, the sound coming from behind the speakers may vary dramatically as you pan from one to another creating a serious sound continuity issue if you later choose to cut from one angle to the other. This is one of the reasons professionals point the microphone nearly straight down, at the end of a boom pole.

With the exception of interviews, most documentary-shooting involves people relating to each other, a cardioid (wider) pickup pattern is more versatile in most cases. Off-camera voices are not so far off-mic, background sounds don't vary so greatly with pans and they have no rear lobe picking up unwanted sound behind the camera. The exception to this is when shooting in a terrible sound environment with lots of off-axis noise; then a supercardioid may be a necessity, but it will limit your camera angles.

Some other considerations: A camera microphone should have a low-cut filter. Frequencies below 100 cycles (Hz) are mostly noise: traffic, wind, handling noise, etc. Loud low frequencies can cause pre-amp distortion, where your levels look OK, but the sound is distorted anyway. Since a camera microphone usually records speech, it helps if it has what's known as a "presence boost." This is an accentuation in the 4,000Hz to 8,000Hz range of sibilant and fricative sounds that make speech intelligible. Being mounted on the camera, the microphone is subject to substantial handling or mechanical noise and unlike many professional microphones must have excellent mechanical noise rejection. Lastly, a camera microphone must be of a size and shape that facilitates the use of indoor and outdoor windscreens and does not inadvertently jab your subject in the face. The Sennheiser K6/ME64 modular microphone has all those attributes. The K6 is the power supply; the ME64 is a cardioid capsule. It can be either battery or phantom-powered and the ME64 cardioid capsule can be swapped for a ME66 supercardioid capsule. There are many great supercardioid microphones, a remarkably inexpensive one is the Audio-Technica AT875R which has a built-in low cut and a presence boost.

Any of the above are effective interview microphones, provided they are on a boom, pointed down, and as close as you can get to the subject. It's a common but usually pointless practice to record interviews with both a boom microphone and a wireless lavaliere. The boom almost always sounds better and the lavaliere is prone to all sorts of failures. One issue that reaches comical proportions is what I call the "first-person pronoun problem." Anyone being interviewed about their own experiences will most likely tap their chest and the lavaliere every time they say "I," "me," "my," "mine, "our" and so on. A wireless lavaliere can be useful when ambient noise is loud.

The popular Sennheiser G3 was a great advance in functionality and low-cost. However, the newer Sony UWP series have some distinct advantages. The UWP-D16 kit includes a body-pack transmitter, a receiver, a microphone and a plug-on transmitter.

The Sony UTX-P03 plug-on transmitter has the advantages of phantom power and the ability to accept both microphone and line-level (amplified) sources. That's useful for plugging into house sound systems, press bridges, etc. The Sony URX-P03 receiver has the big advantage of a headphone output, more on that later.

On the downside, the Sony bodyback transmitter is a bit more awkward than the Sennheiser, and system noise is a little worse. However, in most documentary shooting, system noise will be covered by ambient sound. 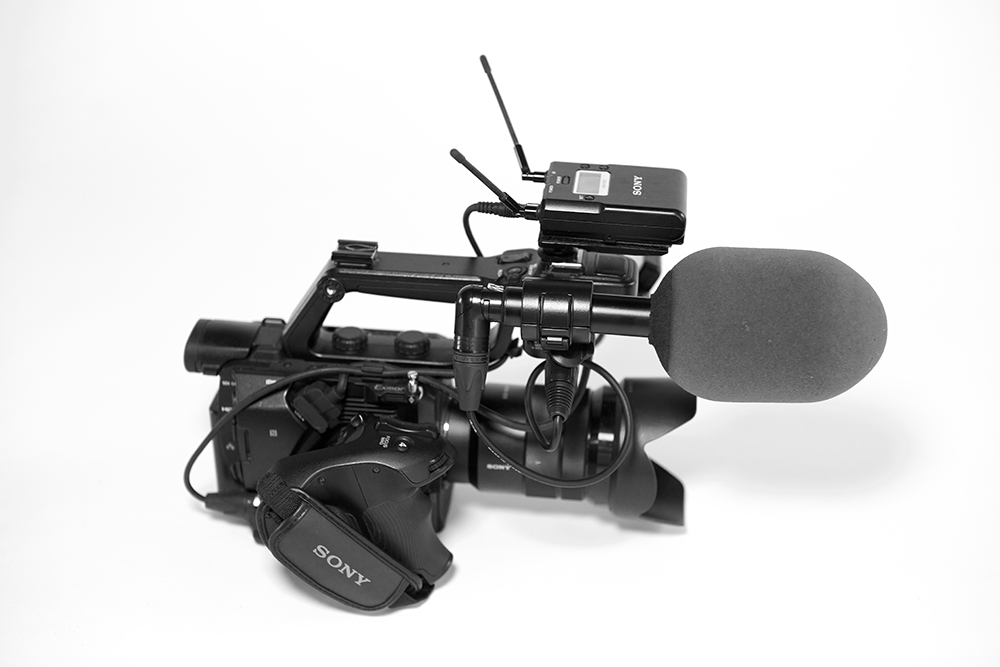 A basic setup might be a K6/ME64 on the camera and a wireless on your principal subject. A Sennheiser G3 or Sony UWP-D11 wireless will work well in this configuration. However, having a second microphone and the Sony UWP-D11 and UWP-D16 systems greatly increases capability. You can work in the following configurations.

My ideal kit, given what is presently available, would consist of both a Sennheiser K6/ME64 and K6/ME66, or an Audio-Technica AT875r microphone with indoor (foam) and outdoor (furry) windscreens and cables. For interviews, you will need a stand, a short boom pole, a boom pole holder, a grip head and a couple of cables. You will need a set of headphones or high-quality ear buds. For critically evaluating sound quality, the Sony MDR-7506's are the standard. The Senal SMH 1000 headphones are nearly as good and have the advantage of both straight and coil cables. For most solo shooters, monitoring audio is primarily for the purpose of making sure it's there. It's challenging, if not impossible, to critically assess audio quality, listen to content, compose images and chew gum at the same time, but it is a necessity to stay on top of whether the sound is there or not. Dead batteries, bad cables and the many things that can go wrong with wireless microphones are waiting to trap you.

Documentary teams tend to work in a rigid role structure of director, cameraperson, soundperson and so on. This makes sense on well-budgeted productions with professional crews. With small, informal crews, role-flexibility is sometimes a better way. Some directors shoot, some do sound and at some moments the best results may come from switching roles. A talented vérité shooter is not needed to shoot interviews and may at times be the best interviewer. A director/shooter may be more effective out from behind the camera in certain situations.

While the cost of sound equipment has come way down, it's still a significant investment. But then, what percentage of the information in your film will be in the sound?

END_OF_DOCUMENT_TOKEN_TO_BE_REPLACED

The Tools of Observational Sound

How to Score with Your Documentary Composer: An Interview with Richard Fiocca

It's All in the Mix: The Secret of Sound Design, Part 2