The Tools of Observational Sound 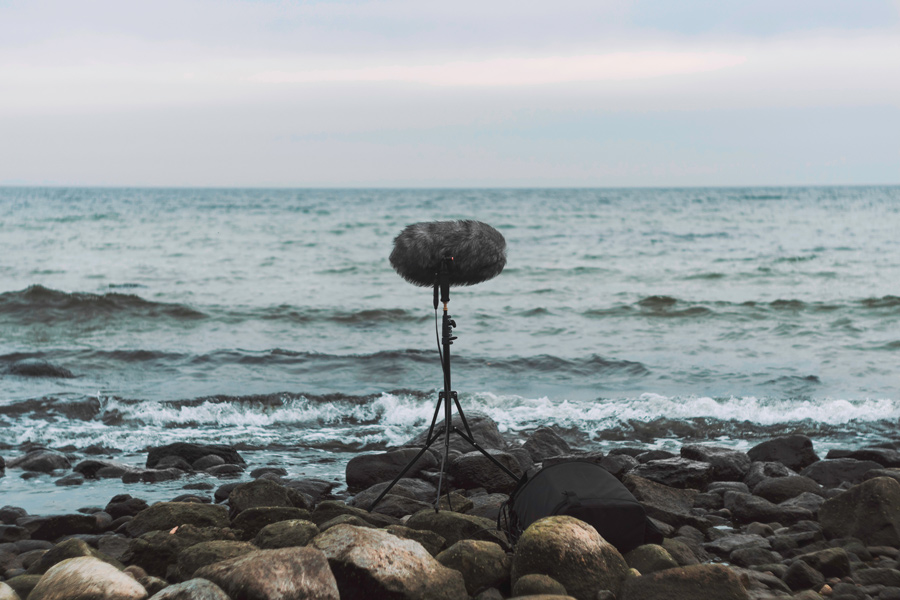 Psychologist Silvan Tomkins wrote about "the tendency of jobs to be adapted to tools, rather than adapting tools to jobs." The job of recording observational sound is unique in that being an empathetic presence is as important as being technically competent. Sound gear choices are too often made without concern for the nuances of this very social kind of filmmaking.

If you are a solo shooter or have a creative partner instead of a professional doing sound, equipment choices have a considerable effect on your access, camerawork, available content and your ability to be either engaged or inconspicuous. These suggestions are directed at small crews using a camcorder.

Wearing headphones in an intimate setting is an obvious gaffe, but not monitoring sound at the camera will lead to grief. Too many scenes have been lost due to dead batteries, bad cables or what the British quaintly call "air gaps"—unplugged cables. This is a no-content issue. High-quality earbuds will do for monitoring camera audio without the geek factor of headphones. They aren’t so much for evaluating sound as confirming it’s present. High-quality headphones are needed as well for controlled situations such as interviews and checking sound on playback. Sony 7506s are the standard.

There are dozens of microphones recommended for camera mounting. Almost all of them have a "shotgun" (supercardioid or hypercardioid) pickup pattern. Salespeople and many well-meaning audio technicians will steer you to a shotgun microphone, asserting it has more "reach." Reach is a misnomer for increased working distance due to off-axis rejection. Understanding the difference is important. In noisy locations a shotgun microphone does have a greater working distance because it favors sound directly in front of the microphone and sharply attenuates sound from the sides.

The sound of a person speaking to the side of a shotgun microphone is unnaturally distant and suffers from "coloration"—uneven frequency response. The solo shooter internalizes this anomaly and is liable to fall into a rote series of pans trying to keep up with the conversation. The shotgun pattern of the microphone directs the camera. What if the reactions of a person listening are more important than the person speaking? It’s a hard choice knowing that panning off a speaker will greatly degrade the sound.

The directionality and horizontal orientation of a shotgun camera microphone emphasizes noise sources directly behind your subject. The loudness of those sources will change dramatically as you pan, creating matching problems in post.

A cardioid microphone is also directional, but less so. On-axis sound is prominent. Off-axis sound is reduced in level but is not unnaturally distant or colored to the point of unusability.

In relatively quiet indoor locations, there is little difference in working distance between a shotgun and a cardioid microphone, but the wider pattern can make a big difference in visual possibilities, especially for the solo shooter.

So which do you need for your camera—shotgun or cardioid? Have both. When fighting noise, or working with a sound partner who can cover off-camera sources with a boom or hand microphone, use the shotgun. In solo shooting and low-noise situations, a cardioid microphone will be more consistent and allow you to follow your visual instincts rather than chase sound.

My preferred cardioid camera microphone at the moment is the Rode NT5. It has a slight presence boost that increases voice intelligibility, low handling noise, minimal coloration of off-axis sound—and it’s small. The Audio Technica AT875R is a remarkably good shotgun for the price, and it’s not overly directional.

Highly directional shotguns have liabilities for observational work. When filming a group, it’s unknown who will speak next. The most directional shotguns pick up sound directly from the rear as well as the front of the microphone. Observational work is often physically demanding, so isolation from handling noise, durability, resistance to moisture and rejection of radio interference are all important. The Rode NTG3 and even the less directional Audio Technica AT875R both work well on a boom.

An advantage of the boom over wireless microphones for observational work is the ability to give privacy. If your subjects speak about with painful or incriminating personal details, there will be moments when they either want privacy or to speak off the record. If they’re wearing a wireless microphone, you can’t guarantee privacy. A boom can be moved away.

A boom microphone can also lead coverage. Some people are talkaholics, especially when talking to the filmmakers. A microphone gives them license to ramble on. The cameraperson may linger on them out of politeness while the person you want to hear from sits silently by. My response to talkaholics is to listen for the end of a thought then quickly and overtly point the microphone at the person we want to hear from.

Because observational booming is usually done from underneath, it does not require a long pole. A handgrip instead of a pole will do much of the time. A pole rarely needs to extend more than six feet. A pole that’s longer than two feet when retracted is awkward in cars and other tight spaces. The  K-Tek KE-79CCR collapses to 22" and has a side exit connector that helps when your back is to the wall. Longer poles are useful in situations such as classrooms, boardrooms and discussion groups when an overhead boom is acceptable.

Windscreens for observational work need to be inconspicuous and effective. The most effective windscreens are the blimp-style contraptions with fur covers, but they are awkward and intrusive in real life. They fascinate toddlers and can get you into serious trouble with horses, dogs and in my own unfortunate case, a monkey.

Use foam windscreens indoors. The Schoeps W5D foam ball has a unique design with an air space that makes it effective enough to use outdoors. The W5D will work on any 20mm diameter cardioid microphone. To use your shotgun microphone outdoors, you’re stuck with a slip-on furry windscreen. 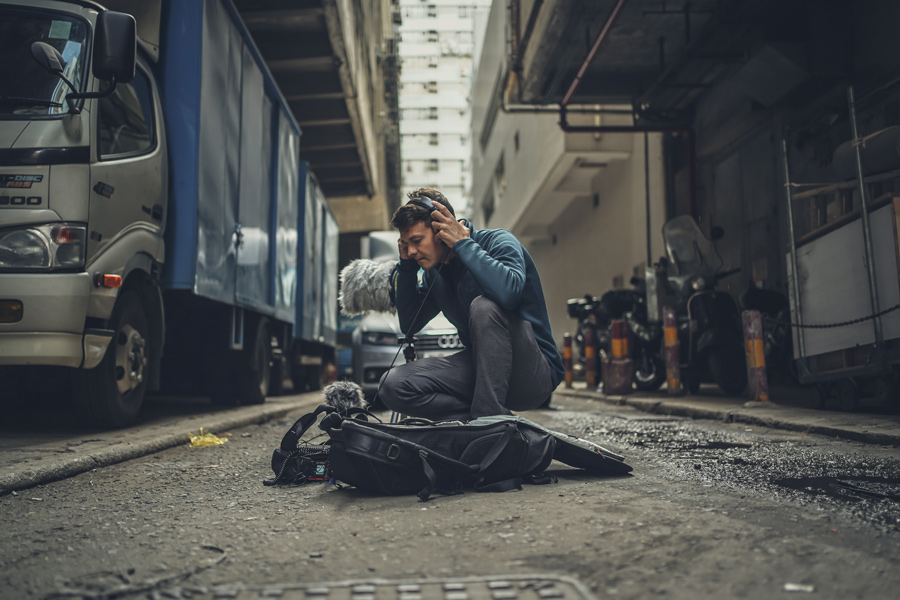 In observational work the lavaliere microphone on your principal subject may double as the main audio source for whomever he or she talks to. If the lav is mounted high on the chest or under the chin, the two voices will sound very different. Mounting the lav lower on the chest will give a better balance, but look out for seatbelts.

There are plenty of easy-to-use, inexpensive wireless systems. Most have serious downsides for observational work. The worst liability might be non-removable rechargeable batteries. The batteries in these units may run down part way through a long day, or you may have to shoot days in a row without access to power.

The term "latency" is prominent in wireless microphone specifications. A digital wireless system converts analog audio from the lavaliere microphone to a digital signal for transmission then converts it back to analog for your recording device. This creates a delay called latency. The wireless audio gets to your recording device later than audio from a hardwired boom or camera microphone. A professional recorder with isolated tracks can compensate for latency, but a camera or prosumer recorder cannot. This time difference can add hollowness, distortion or in extreme cases a minute echo when the two sources are mixed. Mixing in a channel with latency can degrade music. A latency greater than 10 milliseconds may degrade voice. There are a couple of popular wireless systems on the market with 19 milliseconds latency, avoid them.

When changing locations, you may find interference on a wireless channel and need to change the frequency. If you use more than one system, you might run into a really boring phenomenon known as intermodulation, where frequencies that are free still don’t work together. Most current wireless systems have a scanning function that provides you with groups of usable frequencies and a quick way to select them. Some of the newest systems automatically choose frequencies, but suffer from other problems such as latency and short-lived, built-in batteries.

The Sony UWP-D and Sennheiser G3 and later systems are both good, but the Sonys have the advantages of a headphone jack on the receivers, the options of a two-channel receiver and an inexpensive plug-on transmitter with phantom power that facilitates wireless boom, plant microphones and tapping into house feeds.  There are a number of inexpensive systems on the market that operate in the 2.4 gHz band. While maybe OK for vloggers, they rarely have the advertised range or enough available frequencies in dense urban settings. Even a wooden wall can reduce range to about 35 feet with the Sennheiser XSW systems.

A recorder should be simple enough that you don’t have to relearn it for each new project. The Zoom H5 is a straightforward 2-track (4-track if you add an accessory) recorder that is unlikely to trip you up. The MSH-6 M/S stereo adapter is great for recording ambience or using the H5 as a plant recorder, say on a table surrounded by people speaking. If you are more technically adventurous, the Zoom F4 and Sound Devices MixPre-3 II and MixPre-6 II recorders are breakthroughs in quality and ease of use.

Buy your own sound equipment. The expense is minimal when you consider that sound gear will outlive many cameras. Keep your equipment for personal use. Even the most diligent friend might forget to tell you about a changed menu item that can foul you up.

When filming in observational mode, you are both an involved person and a technician. The technician is mostly a liability. The greater ease and confidence you have with your equipment, the more present you can be as a person.

Author’s addendum: Since this article was written, there are two significant developments in how sound for documentaries will be recorded in the future. Setting levels will be all but eliminated, with 32-bit, floating-point technology that is increasingly available in affordable recording equipment. The German company Tentacle is coming out in Q1 2020 with a low-cost device that may radically redefine how wireless sound is done. The Tentacle Sync Track E will function as a time-coded 32-bit floating point pocket recorder that can be controlled by an iPhone or Android app. The Sync Track E is not a transmitter/receiver system. It records at the source so the sound can’t be monitored from a distance, but it will be in sync and app-controlled and will have a far greater dynamic range than any wireless system.

Alan Barker has worked on hundreds of documentary and documentary-style productions. He speaks from the experience of having made every possible mistake at least once. He partners with Joan Churchill in filmmaking and life.