Licenses and Rights in the Post-COVID Festival Landscape 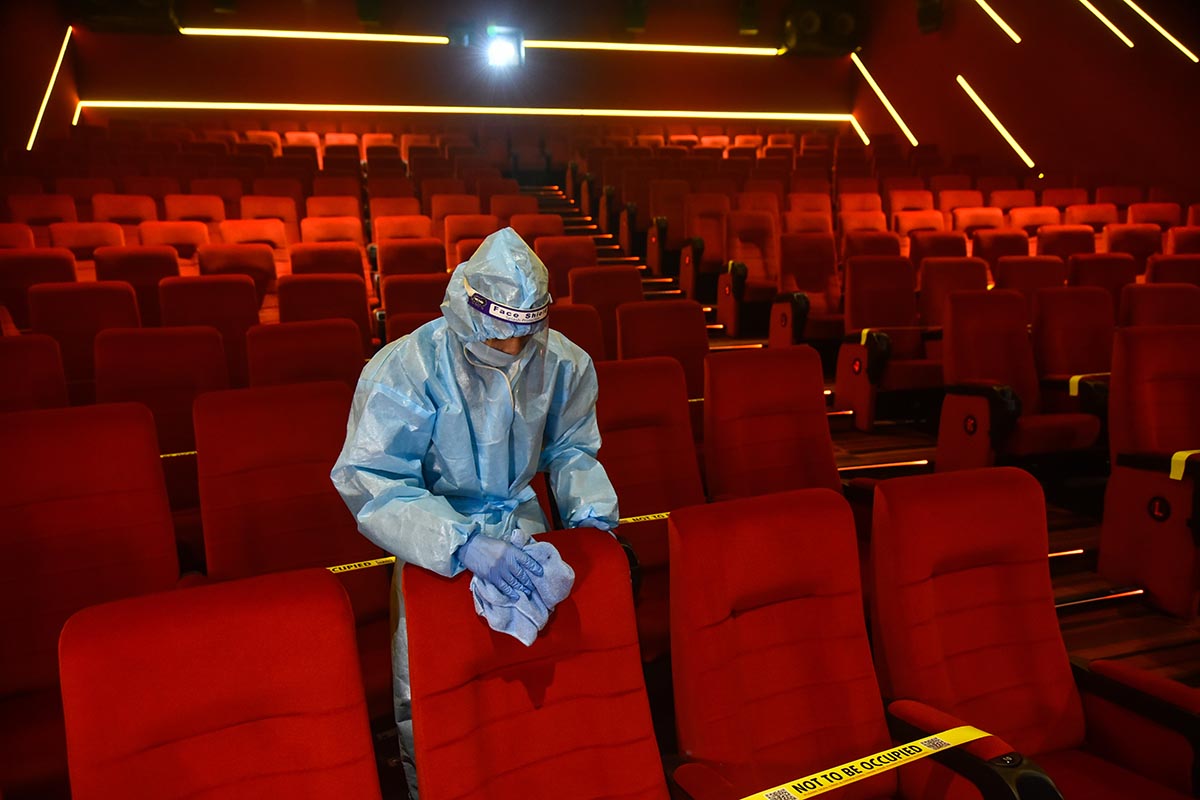 As film festivals leverage digital technology to expand their programs, how might this impact agreements between producers and third-party licensors of music and clip rights?

Forced to cancel events due to the pandemic, many resourceful film festivals over the past year pivoted to online festivals with digital programming and screenings as a means to survive. The response has been largely favorable; quarantined audiences flocked to virtual platforms and were able to view films and attend panel discussions. In light of this surprising success, many festivals are planning to incorporate virtual programs as a complement to the traditional festival events on a going-forward basis long after audience-capacity restrictions are lifted.

How might the hybrid film festival format impact the legal relationship between documentary producers and third-party licensors of music and video clip rights? When a producer accepts an invitation to screen a documentary at a festival, a programming coordinator often forwards an online application to be filled out by the producer. When signed by the owner of the film, the application grants to the festival the right to screen the film a finite number of times over the course of the festival. In addition to the grant, the application often contains a section in which the producer warrants and represents that it has cleared or acquired all of the third-party rights in connection with the film. Among other entitlements, these rights might include the authority to perform intellectual property such as video clips and music elements incorporated into the documentary that are licensed by the documentary maker from third parties. The application may also seek an indemnification from the producer in the event the festival receives a claim from a copyright holder.

"Festival" licenses from third-party copyright owners have been relatively inexpensive because they are limited in scope. For example, a producer may acquire a "step" license to include a video clip or song within their film at festivals only and pay a fraction of the cost of a full distribution license, given the limited number of screenings and the non-commercial venue.

But with the innovations in technology and distribution, festival audience members are no longer restricted to the confines of a screening calendar or a single theater. Instead, they may have the option to view films online via on-demand, pay-per-view transactions, or through streaming content over a festival-branded digital network. Industry insiders foresee a future where, with so many ways to present films, festivals morph into the potentially lucrative realm of content distribution. Although many producers will appreciate the opportunity to screen their films on multiple occasions to a greater number of film fans, the grant in a standard festival license may now need to include digital distribution rights, errors and omissions insurance, and expanded representations and warranties that cover broader commercial screenings.

The landscape for distributing independent films has never been more complicated. With a challenging marketplace for distributed films and a declining number of distributors willing to risk substantial dollars acquiring films that lack top festival awards, the move to festival distribution could be an opportunity for producers to reach larger audiences while sharing in ticket sales and advertising revenues. The move to festival distribution may increase upfront costs to producers, however, because festivals will likely require producers to pay for errors and omissions insurance and broader rights than the traditional limited festival license. As such, the cost-saving festival "step" license from third-party owners of clips and music may become a relic for producers.

To prepare for this evolving industry trend, film festivals will have to review and revise their applications to require expanded representations and warranties, and augment their indemnification clauses and errors and omissions coverage in the event that video clip or music copyright owners sue the festival for unauthorized use of their materials.

Similarly, producers should carefully reconcile the licenses from third-party copyright owners that are geared to festival screenings rather than full-fledged distribution. Perhaps the biggest adjustment may come when producers are asked to cover the cost of a standard distribution license for clips and music.

How does the new small-claims procedure for copyright disputes work, and how will it affect documentary filmmakers?

A new virtual small-claims court for copyright disputes is coming as early as December 27, 2021. It could be a valued resource for documentary filmmakers, or it could be a problem.

The court is the creation of the federal Copyright Alternative in Small-Claims Enforcement (CASE) Act, signed into law last December. Fees and expenses to litigate disputes will be considerably less than in federal court. The new venue is not universally appreciated, however, as some say it offers “copyright trolls” an express lane to challenge fair use in documentaries and other works. At the same time, it could give documentary filmmakers a chance to vindicate their rights in a relatively inexpensive and quick alternative forum.

The CASE Act provides for a Copyright Claims Board comprising three "officers" who determine claims in an arbitration-like setting. Participation in proceedings before the board is voluntary. A "claimant" always has the alternative of bringing an action in court before a judge or jury and the target of a claim, the "respondent," can dodge a CASE Act proceeding by opting out after being served with a claim.

How will it work? A claimant commences a proceeding by filing a claim of infringement (by a copyright owner), or of noninfringement (by a copyright user, to test a fair use defense, for example). Certain Digital Millennium Copyright Act ("DMCA")-related claims are also permitted. The respondent, who must reside in the US, is entitled to bring counterclaims. A claim for infringement can be brought while a copyright registration application for the allegedly infringed work is still pending, but the Copyright Claims Board cannot make a determination until the registration certificate is issued.

A claimant alleging infringement can request monetary relief in the form of actual out- of -pocket damages and profits of an infringer, or statutory damages with a limit of $15,000 for each work infringed and a total limit of $30,000 per proceeding. These limits are cut in half for infringed works that were not registered with the Copyright Office before the infringement took place (or within a limited time after publication).

After receiving a claim, the respondent has 60 days to opt out of the CASE process by giving notice to the claimant. If the respondent does opt out, the claimant must go to court or abandon the claim. A respondent that doesn’t opt out is forever barred from having the case decided by a federal judge and from presenting it to a jury.

The respondent then has to respond substantively to the claim within a prescribed time period or else the claimant can obtain what amounts to a default judgement. But the respondent will still have an opportunity to oppose a final determination.

Proceedings before the Copyright Claims Board take place through written submissions and hearings and conferences "carried out through internet-based applications and other telecommunications facilities." Special arrangements can be made to accept "physical or other non-testimonial evidence" that cannot be furnished online.

Discovery is generally permitted through demands for information and documents, written questions, and written requests for admission. Formal rules of evidence do not apply and expert testimony is welcome only in "exceptional cases." The parties also can request a conference with a Copyright Claims Officer to facilitate settlement.

The Copyright Claims Board is forbidden from making a finding that a copyright infringement was willful—which in a court proceeding could raise the maximum statutory damages from $30,000 to $150,000 per copyrighted work—but they can consider, as a factor in determining damages, whether the infringer agreed to stop or "mitigate" the infringing activity. And unlike copyright infringement actions in court, the winning party is unable to recover attorney fees and expenses in the absence of "bad faith conduct" by the other party, and even then those fees and costs are subject to a low ceiling of $5,000.

Each case is considered individually on the basis of evidence presented for that case. The results in one case cannot be cited as evidence in another case. At least two Copyright Claims Officers must attend all hearings, and at least two out of three must agree on a determination.

Apart from asking for reconsideration by the Copyright Claims Board and review by the Register of Copyrights, there is no opportunity for appeal, with a limited exception. An unfavorable decision can be brought to a federal judge for review only if "misconduct" can be shown, like fraud or corruption by the Copyright Claims Board, or the board exceeded its authority. A simple bad decision of the board that is inconsistent with the law cannot be fixed by a court.

There are some features of the CASE law that are intended to put the brakes on copyright trolls. For example, the Register of Copyrights can limit, "in the interests of justice" and sound administration, the permitted number of proceedings each year that can be brought by one claimant. And (as already noted) up to $5,000 in attorney fees and costs of the proceeding can be awarded to an aggrieved party when claims are brought in bad faith; if a "pattern of practice" of bad faith conduct is shown, the Copyright Claims Board has the discretion to award more. If a party (or attorney) brings a claim, counterclaim or defense for a "harassing or other improper purpose" more than once within a 12-month period, they can be barred from initiating another claim for a year.

Will the CASE Act result in a useful, low-cost means of pursuing good claims or just encourage questionable claims that no one would bring in regular federal court due to greater expense and intimidating judicial oversight? Or will it the CASE process simply be avoided more often than not? Time will tell.

In the meantime, documentary filmmakers should anticipate potential adverse claims by setting up a process to deal with them before the end of 2021. Letting the 60-day opt-out period slip by not only risks default judgments but also increases the cost of doing something about them. And because attorney involvement is not required, recondite rules of evidence don’t apply, and given the relative informality overall, an in-house defense team of non-lawyers might even be considered.

All that applies to claims against filmmakers. It’s also useful to remember that documentary filmmakers may use the process to deal efficiently with third-party copyright owners making inordinate demands to settle claims and with patently meritless challenges to fair use. And documentary filmmakers are not only copyright users, they are copyright owners. Filmmakers who wish to challenge the applicability of fair use to unauthorized exploitation of their own works also may avail themselves of the CASE process, in which no decision creates a precedent.

Steven Beer is a partner at the law firm LewisBrisbois, where he serves as a chair of the national entertainment, media and sports practice.

Neil J. Rosini is a partner at the law firm Franklin, Weinrib, Rudell & Vassallo where his work is concentrated on documentary production, legal counseling and review.