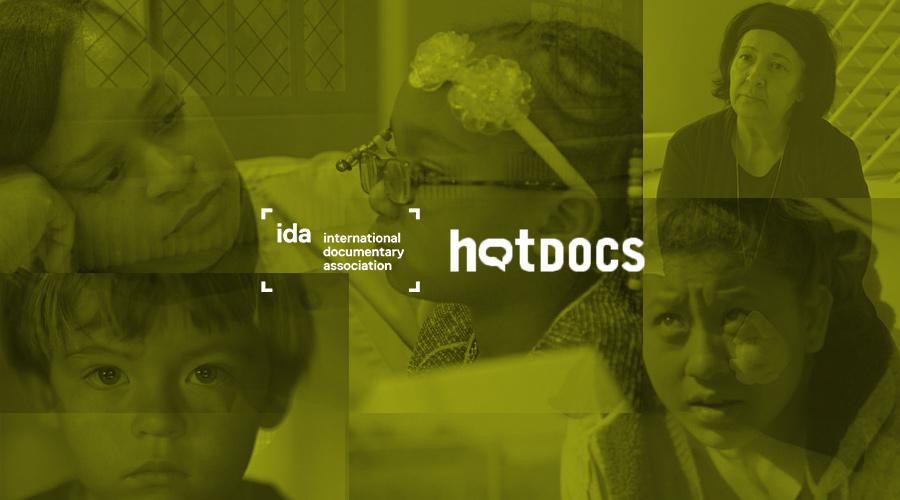 Hot Docs is back for its 2021 festival edition, bringing short and feature-length documentaries from around the world to viewer's home screens between April 29 and May 9. Among the 219 films on the lineup this year are plenty of titles from the IDA family, including IDA Enterprise and Pare Lorentz Documentary Fund grantees, fiscally sponsored projects and films by IDA members. Check out what's in store and make sure to save your spot at showtimes for each film!

In a Midwestern state caught between the opioid epidemic and surging incarceration rates, three unforgettable mothers prepare to leave prison and rebuild their lives after being separated from their children for years. In this film directed by Academy Award-nominated filmmaker Jennifer Redfearn and produced by Tim Metzger, viewers get an uncompromising view into the world of these mothers, who, after facing alienation and addiction, begin to see the promise of reunion and redemption.

Radical civil rights attorney, Larry Krasner, leads a band of activists who set out to end mass incarceration by taking over the agency at its center: the district attorney’s office. Directed by Ted Passon and Yoni Brook, and produced by Nicole Salazar, Josh Penn, Michael Gottwald, Ted Passon and Yoni Brook, Philly D.A. watches an unprecedented criminal justice experiment unfold to ask: can outsiders reform a system from within? Having sued police over 75 times for misconduct, this most unlikely candidate for Philadelphia district attorney not only wins, but upends the whole system.

To make ends meet, Americans are working longer hours across multiple jobs. This modern reality of non-stop work has resulted in an unexpected phenomenon: the flourishing of 24-hour daycare centers. Through the Night is an acclaimed verité documentary that explores the personal cost of our modern economy through the stories of two working mothers and a child care provider, whose lives intersect at a 24-hour daycare center. The film is directed by Loira Limbal, and produced by Limbal and Jameka Autry.

With technology increasingly driving all aspects of our society, we are moving quickly toward becoming a “technopoly." Using a visual essay documentary form, Director Natalia Almada and Producers Josh Penn and Elizabeth Lodge Stepp explores the unintended and often dehumanizing consequences of our society's embedded belief that technological progress will lead to the betterment of humanity. Is technological progress inevitable? Are we all increasingly isolated? Do we really have agency to direct its course? Is technology an expression of our humanity or is technology destroying our humanity?

Directed by Yael Bridge and produced by Bridge and Morgan Spector, The Big Scary "S" Word tackles a political ideology feared by most Americans: socialism.  A former Marine and a public school teacher in two different states find themselves broke and unable to sustain their livelihoods through their jobs. Activated by the energy of the 2016 Sanders presidential campaign and the murmurs of a state-wide teacher strike, both turn to socialism, a once-fringe ideology, to tackle problems larger than themselves. The film delves into the rich history of the American socialist movement and journeys with the people striving to build a socialist future today.

Fanny: The Right to Rock

Set against the backdrop of California 1960s culture, Fanny: The Right to Rock reveals the incredible, untold story of three Filipina-American teens who self-founded a garage band in the 1960s that morphed into the ferocious California rock group Fanny, the first band comprised of women to release an LP with a major record label (Warner/Reprise/1970). Fanny's groundbreaking impact has been largely overlooked, until the arrival of this film, directed by Bobbi Jo Hart, and produced by her and Robbie Hart.

Fruits of Labor is a coming-of-age story of Ashley, an American teenager in California, who dreams of graduating from high school and going to college. Tensions build as Ashley’s family struggles with poverty and the threat of family separation due to increased deportations in her community. A lyrical meditation on adolescence, nature and ancestral forces, the film, directed and produced by Emily Cohen Ibañez asks, What does it mean to come into one’s power as a working young woman of color in the wealthiest nation in the world?

In the 1960s, the hippies championed the idea of a sexual revolution. They received neither fatwas nor bodyguards. Today, Seyran Ateş – a Turkish-German lawyer, author, feminist, and one of the first female imams in Europe – is fighting for a sexual revolution within Islam. In return, two fatwas were issued against her, she has received uncountable death threats, and has been living under constant police protection for several years. Director Nefise Özkal Lorentzen and Producer Jørgen Lorentzen take viewers on a journey through Seyran's life, from her humble beginnings as a Muslim girl in Turkey's slums to a female leader daring to challenge her own religion.

END_OF_DOCUMENT_TOKEN_TO_BE_REPLACED

Watch These Documentaries About Plastic Pollution